“We’ve created an interactive map of Government Requests that shows the number of government inquiries for information about users and requests for Google to take down or censor content. We hope this step toward greater transparency will help in ongoing discussions about the appropriate scope and authority of government requests.” 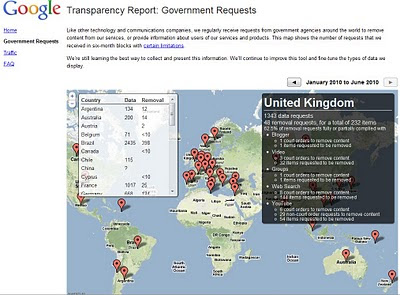 United Kingdom
In the UK for example, the map shows that there were 1,343 requests for data between January and June 2010. There were also 48 requests for the removal of content, regarding 232 items. The majority of this content was within the web search category.