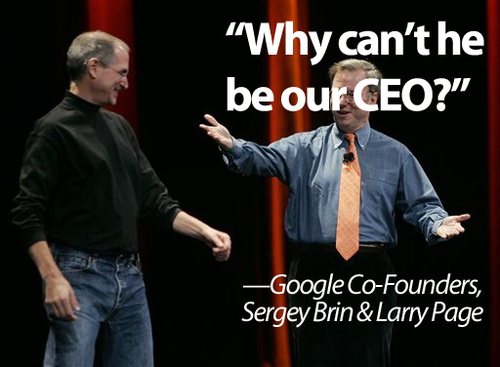 When Sergey Brin and Larry Page were first looking for a CEO to run Google, they met with Steve Jobs. The Google co-founders left that meeting wanting the CEO of Apple to become the CEO of Google.

According to interviews in Bloomberg’s documentary series, Game Changers, that’s who the two boywonders wanted as their head honcho. At the time (early 2000’s), Sergey and Larry had interviewed some 12-13 candidates to become CEO of Google but didn’t like any of ’em. Instead they wanted Jobs, their quote-unquote hero, to be the CEO. Unfortunately Jobs was busy running some other company that was about to embark on a renaissance for the ages.

The Google dudes ended up finding and picking Eric Schmidt who interestingly doesn’t really resemble Jobs at all. It’s funny to think what would’ve happened if things played out differently (even if it was probably never serious for Jobs). Maybe Apple and Google wouldn’t hate each other. Maybe there would be no iPhone. Or no Android. Ah! Never mind! I like the world as it is now.