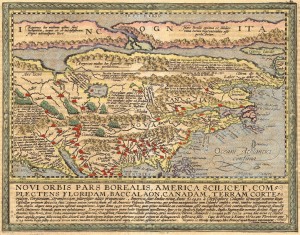 Striking example of Quad’s map of North America, based upon De Jode’s landmark map of 1593.

Jode’s map is one of the earliest maps to concentrate on North America alone. For his map, De Jode condensed information for the map from Dutch wall maps of the late 16th Century De Jode was the first to make use of both John White and Jacques le Moyne’s east coast cartography, although he inaccurately placed it. Quad here continues the mistake of placing the nomenclature of Virginia too far north. A long narrow waterway to the north represents the North West Passage; Lago de Conibas is also indicated. Some names have been surprisingly left out, notably Bermuda, St. Augustine, Roanoke and Chesapeake. A curious ‘second’ peninsula is shown to the west of Florida which could be an early depiction of the Mississippi delta.

The descriptive text below provides a brief overview of the history of North America to date. The projection of California and the West is packed full of annotations and place names. The headwaters of the St. Lawrence extend to Cibola in the mythical Southwest.