WikiLeaks has been all over the news for the past few weeks. As politicians are quickly finding out, fighting something like WikiLeaks doesn’t stop it — it simply causes it to spread. Thanks to the big crackdown against them, their site has been mirrored all across the globe.

Laurence Muller spent some time tracking down the locations of the mirrors (with some useful tools) and built an excellent visualization of them. 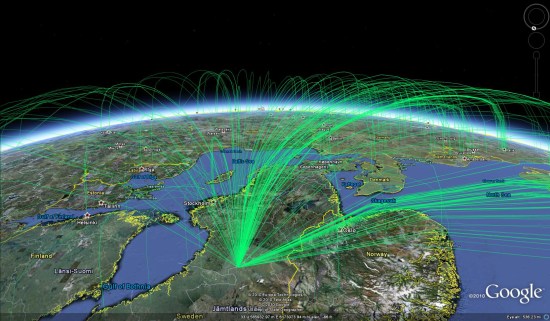 His technique for creating this was pretty impressive. He first found the list of mirrors that WikiLeaks provided, then ran it through GeoLite City which resolved the mirrors to actual locations. He then wrote a PHP script to turn the location into latitude/longitune, and then to compile all of that into a KML file. Details about all of that work can be found on his site. Nice work Laurence!

To see it for yourself, you can visit one of the following pages that have the data loaded in the Google Earth Plug-in:
• Wikileaks Edges only

that has all three versions loaded, or watch the video below that he put together.