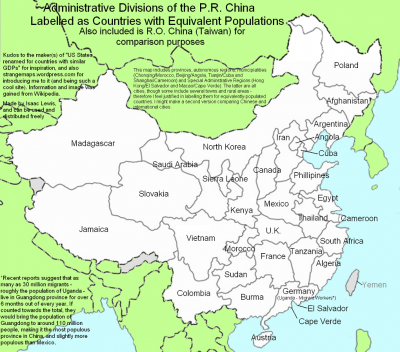 China is the world’s most populous nation . That much anybody knows. But even if we know a bit more (that the number of Chinese is around 1.32 billion, which is just under 20% of all humans alive today), that figure is still too big to mean much beyond that China is ‘number one’ . This map compares the population of China’s provinces (plus the ‘renegade province’ of Taiwan), autonomous regions and municipalities with those of whole countries, and thus helps shed some light on that issue.

Here, for easy reference, is a list in descending order of magnitude of those Chinese territories (their population in brackets) followed by the foreign country they compare to.

Most of China’s main administrative subdivisions are literally unheard-of in the rest of the world, save for some obvious exceptions like Tibet, Beijing, Shanghai and Hong Kong.
The names of some provinces sound especially indistinguishable (or at least are rather indistinct to western ears): Hebei and Hubei; Shanxi and neighbouring Shaanxi; not to mention Jiangxi and Guangxi; or Hainan, Hunan and Henan.
The well-known pattern of heavy population density on the coast and lesser density inland belies the fact that even in the most far-flung provinces, the populations are not exactly tiny (Xinjiang: 20 million, Inner Mongolia: 24 million), Heilongjiang: 38 million, Yunnan: 44 million), except in Qinghai (5 million) and Tibet (3 million).
This map was sent in by Isaac Lewis, who was “inspired by the map that did something similar for US states and international GDPs (here and here) in order to “get a perspective on just how many people 1.3 billion actually is.”

“Mostly the provinces and their labels are very close in population,” Mr Lewis explains. “The largest difference is between Henan province (98.7 million) and Mexico (106.7 million). Other than that, they’re mostly within 1 or 2 million of each other.”