When Apple released the iPhone 4 last summer, one of the great new features was FaceTime — a phone-based video chat, the likes of which we hadn’t really seen before. It had some limitations (wifi-only being the biggest), but it’s proven to be very popular.

Not long after that, a variety of apps were released to help improve the service in various ways. One of the more popular is FTFun (“FaceTime Fun”), which allows you to FaceTime with other users without giving away your cell phone number or email address. To date, there have been roughly 180,000 calls using this service, so it’s been quite popular.

To help show off all of these calls, the FTFun folks have created a variety of Google Maps and Google Earth files to help visualize the data. 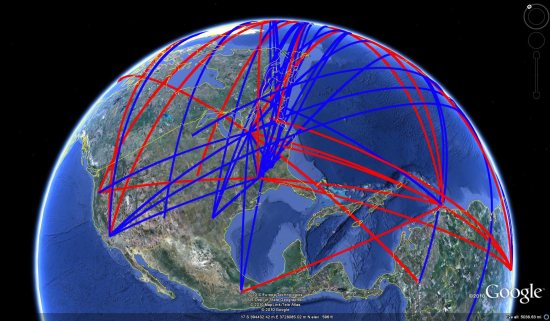 As you might guess, the data is anonymized so that they don’t give away precise user locations. What’s neat the variety of ways in which you can view it all:

| (too many to show in Google Maps)
• Live Data, updated every two minutes: KML

Google Earth is a great place to show off geo data like this, and the guys at FTFun have done a nice job of allowing you to view the data in a variety of ways. I’d maybe like to see thinner lines on it (especially on “Yesterday’s Call”), as things can get quite congested, but it’s nonetheless a fun use of Google Earth.