AlphiMAX has recently updated their Point-To-Point Estimator to support a handful of new Google Earth features, and the result is pretty slick.

The tool already had a lot of great features in it, such as the ability to factor in temperature, terrain data and a variety of other factors.They added Google Earth support to it a while ago, via the Google Earth Plug-in, and it worked very well.

Then they recently added support for Google Earth 6, including the new 3D trees that were part of that release. For a P2P estimator, being able to see trees in the system is certainly an important part of it. The coverage of trees in Google Earth is still relatively small, making this feature somewhat less useful, but it’s certain to grow quickly in the future. 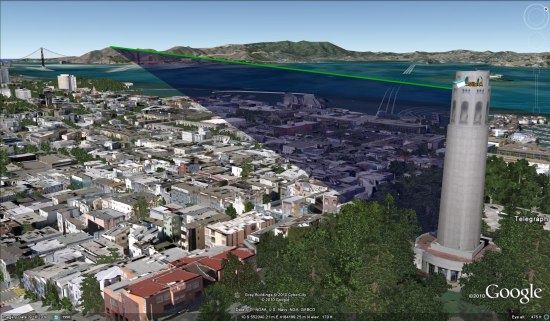 If you’d like to try it out for yourself, simply visit their site and dive in. It’s required that you have an account on their site for it to work, but otherwise you can get up and running fairly quickly. If you’d just like to see a resulting file, here’s a KMZ file

of a test set of data.

Not many of us will need a Point-To-Point Estimator in our work, but for those that do the new enhancements to this program should be very useful!