We are at the beginning of a new era of search that some folks are calling social search. Some businesses are seeing web traffic from the likes of Facebook and Twitter. The local businesses are under constant pressure to try new local marketing channels and often are not sure of how to proceed.

But for the past five years or so, straight up local search has been king. Over that time Google has grown to dominate what was not that long ago a very fragmented market. That being said, I was curious to know exactly what percentage of total web traffic Google was sending to local sites.

I had access to and looked at the analytics for 16 websites that are purely local in nature. Most of these sites have done minimal online marketing, search optimization or in bound linking although a few have. Very few have any budget for online marketing.

I looked at the analytics for businesses that are dependent on traffic in their front door to stay alive and do no appreciable business on the net. For these sites, the vast majority of their web traffic originated from within 75 miles of their location. I compared traffic from Google search to their total traffic (search, referral and direct) for 2009 and 2010. 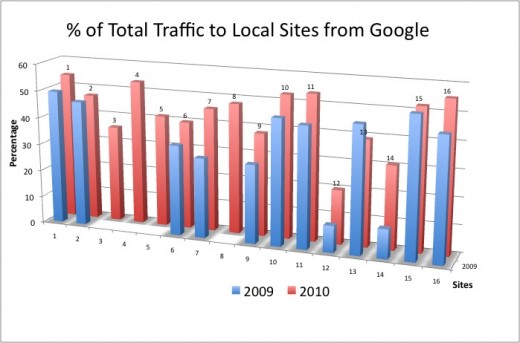 Admittedly, this is not a true sample of all locally focused websites and their traffic sources. These businesses were mostly rural with only 1/4 of them being in cities over 200,000 and most serving cities in the 6-30,000 population range. Their marketing budgets are small in general and even smaller for online marketing. It is not clear how closely they might resemble a more representative sample or an urban sample. Although it is not unlikely that they resemble those businesses in the long tail of urban markets.

But for them, Google is clearly king and provides far more traffic than any other single source. For 1/3 of the businesses, Google sent over 50% of their total traffic in 2010. Google not only sent the most traffic but sent significantly more in 2010 than in 2009.

For those SMBs that are just getting started in Local Search it is clear where they need to look first in assessing their marketing plans. For those that already have a plan in place, it makes sense to evaluate the value and cost of the traffic to your website.

The future of local search is unclear. For the present though, Google offers a solid base of traffic and should be a point of focus of most if not all local search marketing campaigns.

What do you see in your truly local clients? Do they have similar, less or more traffic from Google than this sample? Is this sample representative of SMBs in larger markets? Do you have locally focused business sites that are receiving a high percentage of traffic from sites other than Google?