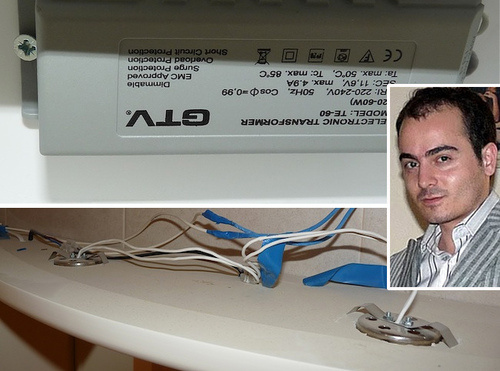 Bulgarian cybercrime blogger Dancho Danchev mysteriously vanished a few weeks ago, worrying his colleagues and the Internet. He’s back! But what happened to him? According to one report, he was confined to a psychiatric hospital.

“Catching up in progress… inbox looks pretty messy” Danchev tweeted today—his first tweet since October. So, that’s a relief. Now, on to the rampant speculation: What has Danchev been up to?

Clues initially pointed to some sort of weird government trouble. Danchev’s colleagues at ZDNet published a cryptic email he’d sent to a friend. Included was a picture of what Danchev believed was a surveillance device in his bathroom, placed there by Bulgarian law enforcement who have been “building a case, trying to damage my reputation.” It looked really scary!

But, there’s probably more (or less) to the story than Danchev being disappeared by Bulgarian cops. According to the Bulgarian news site Dnevik.org, Danchev had been hospitalized in a Bulgarian psychiatric hospital since December 11th of last year. “He is now stabilized and will soon be discharged,” Dnevik wrote on Wednesday.

And, now, Danchev’s back. We’ll take this as a cautionary tale for all bloggers: Once you start seeing surveillance devices in everyday household items, it might be time to take a break and go outside.