Nearly five years ago, Google embarked on an ambitious project to work with everyday users like you to create a 3D model of every building in the world for Google Earth. We’ve made strides toward our goal adding millions of buildings to the 3D layer of Google Earth in cities across the globe. And today, we’re pleased to announce another big step in that direction with the release of expanded 3D coverage of the California Bay Area (which also happens to be the homebase of Google’s headquarters!).

With Google Earth’s “3D Buildings” layer turned on (or by using the Earth View in Google Maps), you are now able to tour tens of thousands of new buildings in the 50-mile stretch between San Francisco and San Jose, as well as select areas of the East Bay, like Oakland and Berkeley. You can now fly through the air and view urban centers of cities like Foster City, Mountain View, Palo Alto, Oakland, Redwood City, Santa Clara, Santa Cruz, San Mateo, and Sunnyvale, in 3D.

If you’ve never been to the Bay Area, start by visiting iconic landmarks like the Golden Gate Bridge and the Ferry Building (note: you will need to have the Google Earth plugin installed to view these links). While in San Francisco, you may notice that in addition to 3D buildings, there are also 3D trees throughout the city. This is a new feature we released with Google Earth 6.0, and San Francisco is one of the first few cities to showcase 3D trees. 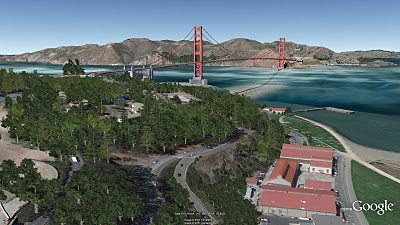 The Bay area peninsula is also the home of Silicon Valley. Several technology companies are available to view in 3D, including of course, the Googleplex in Mountain View. 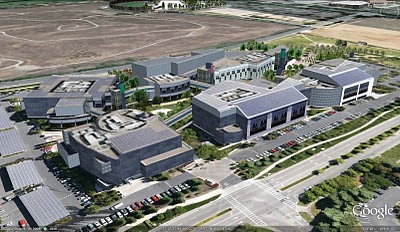 Sports fans might be interested to check out the HP Pavillion, where the San Jose Sharks play, as well as AT&T Park, home of the 2010 worldseries champion, SF Giants. Music lovers may also want to view the Oracle Arena in Oakland and Shoreline Amphitheatre in Mountain View. If you’re starting college soon, take a virtual tour of the Stanford and UC Berkeley campuses. 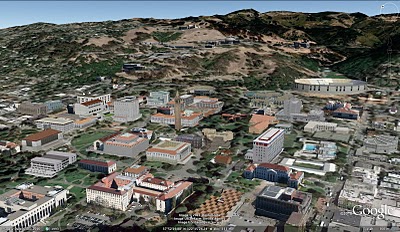 Of course, this is just a small sample of the several thousands of buildings you’ll find in the area. You can check out an expanded tour we created, or you can open up Google Earth and explore for yourself. As you go on your virtual tour, you may notice that several buildings were created by users, who continue to be an integral part of our 3D building efforts. For example, supermodeler, PeterX created nearly 1,000 buildings around the Bay Area, including the NASA Ames Research Center.

If you’d like to get involved in modeling your town (or any other location), we have several free (and easy!) tools to get you started. With Google Building Maker, you can create and contribute a building in as little as 10 minutes. And if you’d like to refine your building, bring it into Google SketchUp for fine-tuning.

Everyday, we are working on adding more 3D cities to Google Earth as part of our larger mission to organize the planet’s geographic information and make it accessible to all.