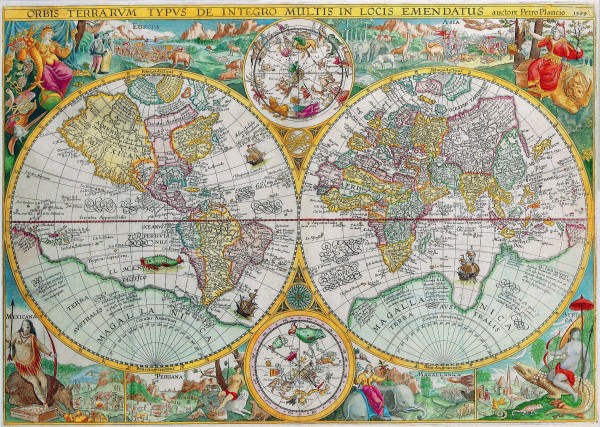 Description: This spectacularly decorative map engraved engraved by the Dutch master Jan van Doetecum holds the distinction of being the first world map to use a style of richly decorated border that would dominate world maps for decades to come. The elaborate borders were inspired by drawings in the works of Theodore de Bry published a few years earlier and established a pattern of cartographical decoration that lasted over a century. The map also has great importance geographically, particularly in the mapping of the Arctic and the Far East. The map contains a marvelous attempt at a North-West Passage, and Plancius himself instigated the three voyages of Willem Barents (1594-1597) into the area. He used this map to give cartographic encouragement to the Dutch crews by turning Novaya Zemlya into an island with open sea between it and the Arctic. A sprinkling of English names in the Canadian Arctic appear as a result of Frobisher and Davis’s explorations in search of the passage in 1576-1587. The map is also a landmark in the mapping of Asia and Japan. Plancius was one of the first Europeans able to penetrate the wall of secrecy surrounding the manuscript portolan maps produced by Spain & Portugal. ” Some of the most significant improvements include the first incorporation of Teixiera’s outline for Japan.. Ususal fold reinforcements, narrow margins and minor faults. Backed on archival paper. A visually stunning example. Shirley 187.