GEB reader ‘Matthew’ recently sent us a very impressive recreation of the Mt. Lebanon North Family Shaker Village in New Lebanon, NY, which is often considered to be the birthplace of Shakerism in the United States.

As you can see in the image below, their work includes not only some excellent 3D models, but other details such as information about their complex water systems: 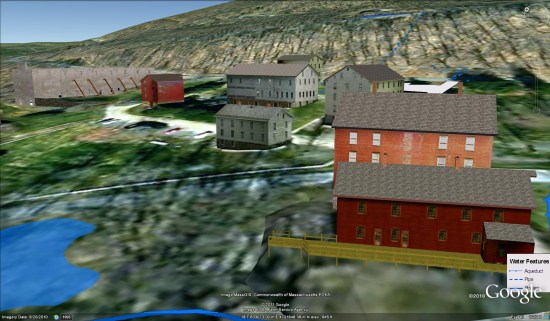 To fill in the full story, Matthew has written up more details about how it all came together. Watch the video below for an overview, and then read Matthew’s words below that for detailed information.

In 2009, two of the National Park Service’s Heritage Documentation Programs (the Historic American Landscapes Survey and Cultural Resources GIS) worked to document the Mt Lebanon North Family Shaker Village in New Lebanon, NY. The site is owned and operated by the Shaker Museum and Library and is perhaps best known as the birthplace of Shakerism in the USA.

A team lived on the site through the Summer, working to create detailed measured drawings of landscape features, with an emphasis on documenting the complex waterworks system at the site. The Shakers constructed a series of underground aqueducts, reservoirs, and piping to aid in numerous agricultural, industrial, and domestic tasks.

However, little was known about how the system operated or where many of these underground features were located. To make it worse, one of the main buildings experienced repeated damage from flooding cause by heavy rains which seemed to mysteriously flow in from unknown sources. Thanks to the work of the Summer team, many issues like this one have since been resolved.

Cultural Resources GIS staff utilized georeferenced maps, GPS data, and detailed 3D models of the village to produce this tour of the site which explains some of the mechanisms of the water system.

These models are now part of the official 3D buildings layer, and you can find them all in the Google 3D Warehouse. Additionally, a KMZ

was developed which allows users to interact with landscape plans, historic and modern photos, and GIS overlays. Clicking on some of the historic photos and drawings will link you to the documentation archived at the Library of Congress.