We’ve added many historic sites to Street View to let you explore these places online, and now we’ve included Street View imagery of the Hiroshima Peace Memorial,  also known as the “Atomic Bomb Dome.” On August 6, 1945 at 8:15am, the first nuclear device to be used in warfare exploded almost directly above this building. The annihilated structure became an iconic symbol of the bomb’s devastation, and despite rebuilding the rest of the city, Hiroshima decided to keep the Dome in its post-war condition to stand as a living testament to the horror of nuclear conflict. 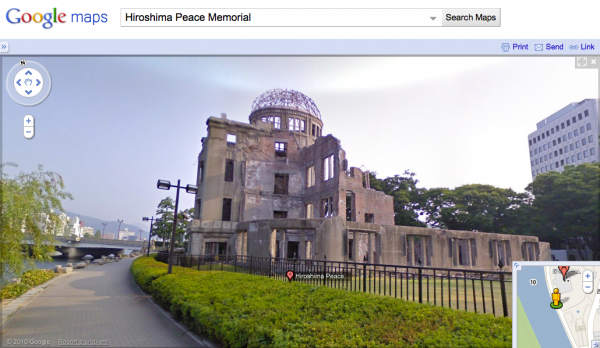 The Atomic Dome has always been an important reminder of history, but also a living beacon for the message of global peace. The desire to experience the Peace Memorial as a physical space makes it a great match for Street View, which both enables people around the world to tour the site virtually and also preserves this important imagery for the next generation. We hope that the imagery will inspire users outside of Japan take a new interest in Hiroshima’s history and think deeply about the importance and meaning of peace.

Along with this Atomic Dome imagery, we have also added special collections of seven places in Hiroshima Prefecture, including Hiroshima Peace Memorial Park and the “floating” Itsukushima Shrine at both high and low tide.