The MapPoint Product Home page has been updated and a trial download for MapPoint 2011 North America is now available. I hear the team is now working hard to get MapPoint 2011 Europe out the door.

After two releases with significant changes (MapPoint 2009 and MapPoint 2010) this release focused primarily on the #1 customer request which is data updates. As such there are 88,000 additional miles of roads. Updates are in the US, Canada, Mexico and Puerto Rico.

Larry Peterson on the MapPoint team at Microsoft writes —

This year we focused on updating our mapping data which is the #1 requested feature. With the 2011 version, you get 1.9 million points of interest (not only updated from 2010 but it was only 1.7million so many more have been added). There are also 88,000 additional miles of navigable roads in 2011 over 2010. That is pretty huge – equivalent to over 15 coast to coast round trips driving San Francisco between New York City.

Product development takes time and release cycles change for a variety of reasons. We’re ultimately committed to delivering top quality to our customers and this is what drives all efforts behind the product. 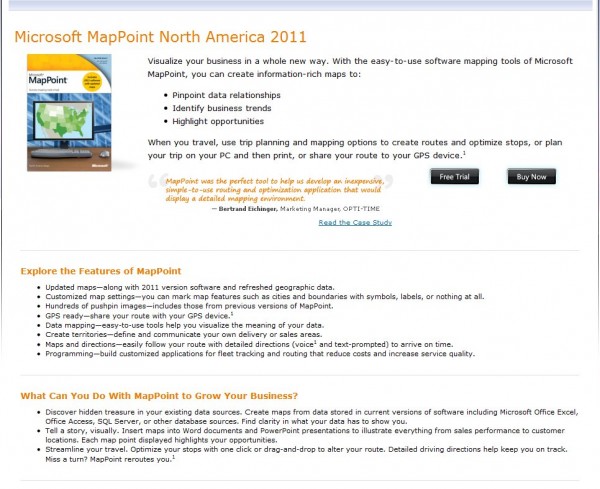