First of all I’ll start by making a point by considering a couple of examples of the development of everyday technologies:

College Dropout changes Computer text: The text you’re reading on screen would be very different were it not for the actions of a student dropout. Steve Jobs dropped out of Reed college but, because it interested him, still attended a class in calligraphy. The techniques he learnt, about elegant letter spacing and formats, were later applied to the Mac and from there were copied by windows. We’ve all benefited from Steve’s nerdy love of text.

Spam Email didn’t have to exist: Email was invented early in the history of the internet but because everyone then knew each other by name, no one bothered to produce code in email programs that checked the ID of senders. We all suffer because this didn’t happen, the internet is swamped by spam email traffic that could have been avoided. Google Wave was an attempt to get us all off email to avoid this sort of problem, it didn’t take off despite having the promotional weight of Google behind it.

Get Technology right early on: My point is that its incredibly important to try and get early technology right otherwise you may never be able to correct it. One of the issues I see like this in web mapping is the clustering of points, if we get it wrong now we may never be able to undo it and we will end up using sub optimal visualisation techniques just because we’ve always done it. 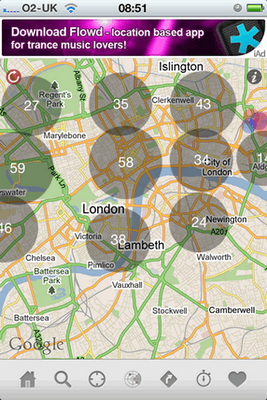 Clustering Placemarks: Previously I’ve written about the problem, placemarks need clustering because at a certain density of points it is becomes impossible to pick individual points out. IMHO some of the ways of visualising these are poorly designed e.g. clustering placemarks into ‘blobs’ with numbers.

It may be that numbered blobs work as a way of clustering placemarks – maybe users immediatly get the concept of a large blob being a cluster and that outweighs other problems I’ve identified. But what worries me is that this technique is all over the place in web maps and no one has actually done any user testing to show that its effective.

Enter my new MSc student Craig who’s doing his project on this map visualisation. By doing a series of user tests we hope to answer the questions:

* Does blob clustering work compared with other techniques?
* If not, can we adapt it so it does?

Wider Point: This isn’t the only example of a technique that is being widely used in web maps without being user tested (anyone for 3D thematic maps?) so I think Craig’s work will also be important in promoting the more general idea that we need usability testing in web maps. At the moment I think web programmers are applying these untested techniques because they think the look flash and/or they are easy to apply because the software needed is readily available.