Ever since the Google Earth Plug-in was released almost three years ago we’ve been amazed by the great applications that have been built around it, including such things as an emergency response map, games and even a way to track Santa Claus.

It’s always worked well on Firefox 3.x, but it’s never performed as well when using Google Chrome because of the way that Chrome handles plugins. However, Firefox 4 was recently released and has the same issue that Chrome has, meaning both browsers perform very poorly when running the Google Earth Plug-in.

To help visualize the difference between various browsers, Paul van Dinther at PlanetInAction has created a slick Speed Test

where you can check your relative frame rate on various browsers. Here’s how it works:

I build a simple test framework that animates 50 screen overlays. The animation addresses position, size and rotation. The animation is performed for each 3D frame drawn which means a total of 200 API calls are made per frame. At 60 fps that would be 12000 API calls per second. Not bad for a bit of Javascript. 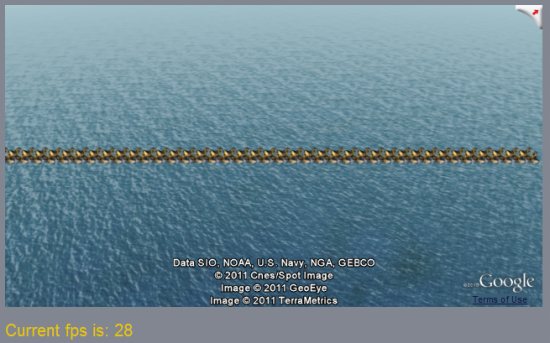 Fortunately, there is a workaround for Firefox 4 that helps quite a bit. If you type “about:config” into your address bar, you’ll get to a page with a lot of settings. Find the line for “dom.ipc.plugins.enabled = true” and toggle it to “false”. Restart your browser and things should run much better. Sadly, it’s set to “true” for new users by default, meaning that the performance of the Google Earth Plug-in for millions of users will be quite poor.

The Google Earth team is aware of the issue and they’re certainly looking for ways to resolve it. Because it’s a core browser issue, and not an issue specific to the Google Earth, it will likely be difficult to resolve, but just know that they’re working on it. You can track the issue using this page in the Chromium bug tracker. Be sure to “star” the bug to help this issue get the attention it deserves.

So what kind of numbers are you seeing with Paul’s speed test? Here are a few we’ve found:

The difference in speed can be quite shocking. It’s not as bad for me on my desktop PC, which is more powerful, but the netbook really shows off the difference between various browsers.