Over the years, viagra sale we’ve made many improvements to Google Maps to make it as useful and relevant as possible. From basics like road and street names, to labels for points of interest and landmarks, to panoramic images on Street View, we’re working hard to make Google Maps as reflective of the real world as possible.

As part of this effort, we include “places” directly on the map by providing clickable icons that link to the Place page for those locations. When you’re on Google Maps on your desktop or on your mobile phone, this makes it easy to explore the world around you and tap into information on the web that can help you make decisions. For example, you can use the map to answer questions like, “Is there a good place to eat near my business meeting?” or “What shops are on that street two blocks over?” In a pilot program in Australia earlier this year, we further expanded this idea of putting places directly on the map by allowing business owners to brand their locations with their own icons – helping users find familiar brands and helping businesses promote themselves. Interest in this feature has been growing, and today we’re excited to announce the beta of sponsored map icons in the United States.

Now, when you zoom in to areas of interest on Google Maps, you’ll more easily be able to spot the locations of companies and brands that are already familiar to you. That’s because we’re working with business owners to enable them to replace the standard icons that appear on the map at their business locations with their well-known company logos. These logos appear directly on the map when you zoom in to see a close-up view of an area. Just like the existing default business icons that appear in grey, these colored logos are clickable and open the Place page for that business. Both large and small businesses can claim their Place pages and enhance them with information including hours of operation, product inventory, photos and videos. 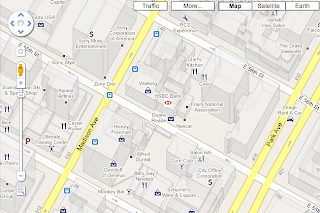 By helping users identify popular businesses, we’re making it easier to browse the map and navigate the real world. That might mean fortunately stumbling upon a nearby ATM when you’re looking up the address of the new restaurant where you’re dining tonight, or exploring the neighborhood you just moved into by figuring out where the grocery store is relative to your new apartment.

In the coming weeks, we’ll also make these sponsored map icons visible on mobile phones, because more often than not, you want to know what’s around you when you’re on the go. So if you’re rushing to meet friends who are impatiently waiting for you “across from the fast food joint,” you can quickly zoom in on the map to see exactly where that is. Or if you’re on the airport shuttle and just remembered you forgot to pack toothpaste, you can keep on time for your flight by checking out Google Maps and discovering that there’s a retail store just a block away from the hotel where you’ll be staying. 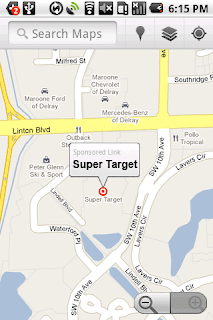 In addition to helping you find locations for some of your favorite businesses, these recognizable logos also help business owners promote the storefronts of their well-visited locations. Advertisers pay to have their company logos appear on the map, and to help you remember their locations the next time you’re in the area. Sponsored map icons are being offered as a limited beta to companies in the U.S. with multiple locations and a well-known brand. Participation in this beta does not affect visibility on the map; the new feature is only available to businesses that already appear on the map, and whose default icons can be swapped out for their logo.

Businesses across a variety of industries, from banking to retailers to self-storage, are participating. We hope you enjoy the ease of finding familiar businesses while browsing new, potentially unfamiliar neighborhoods on Google Maps.