Every day, many thousands of commuters, locals, and tourists ride public transit in Washington, D.C. To help all of these transit riders find their way around the metro area, today we’re making comprehensive information about D.C.’s public transportation available on Google Transit.

In partnership with the Washington Metropolitan Area Transit Authority (WMATA), we’re adding all of D.C.’s Metro and bus stations, stops and routes, as well as connections to other transit systems in nearby cities. You can find this information on Google Maps as well as Google Maps for mobile—no matter where you are, you can get to where you’re going. With Google Transit, D.C. metro-area commuters—including those in Baltimore, Montgomery and Jefferson counties—may discover a quicker route to work, while visitors can easily make their way from Reagan National Airport straight to the Smithsonian. 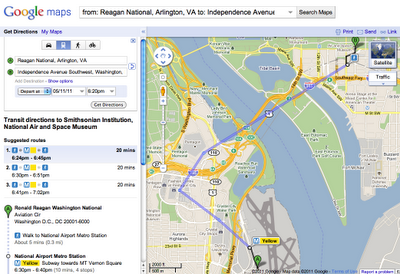 Public transportation is a vital part of city infrastructure and can help alleviate congestion and reduce emissions. But planning your trip on public transit can be challenging, especially when there are multiple transit agencies and you need to use information from multiple sources to figure out the best route. With mapping tools like the transit feature, we’re working to make that easier.

Directions are also available on Google Maps for mobile—so if you’re graduating from GWU and want to meet some friends in Adams Morgan to celebrate, it’s as easy as pulling out your phone. If you’re using an Android device, for example, search for [Adams Morgan] in Google Maps, click on the Places result and select “Directions.” Switch to Transit in the upper-left corner and find out which bus gets you there fastest. 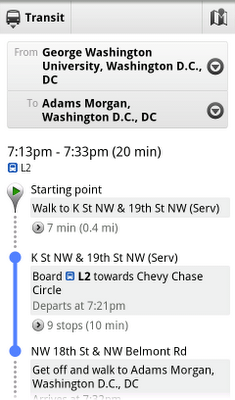 Wherever your journey takes you, whether using public transit, driving, biking or walking, we hope Google Transit directions in D.C. make finding your way a little easier.

Larry Page took over as CEO of Google at the beginning of the week. Immediately thereafter, Google’s product head Jonathan Rosenberg resigned.

Late Yesterday it was reported in an LA Times exclusive that Page has completed a major reorganization at Google that put key executives in charge of their individual business units and reporting directly to him.

From the article (bolds mine):

The executives will be able to act more autonomously and won’t have to turn to Google’s powerful operating committee on every decision.

The structure certainly begs the question: Where’s Local in all of this?

In mid October it was reported that Marissa Meyer had taken on a new role in charge of geo and local. More importantly it seemed, in being promoted to the operating committee it was noted that her voice and focus on local would be more widely heard. Now we learn that the operating committee will take on less of a product role and  that Local, Geo and Maps are not in their own product category.

One presumes that Geo- Local  will once again fall under the broad aegis of search and that Mayer will report to Alan Eustace. Although much of local is also social (Hotpot, Latitude). At least on the surface, it appears that Local (and perhaps Meyer) has been demoted. At best, it implies confused lines of authority.

Whether it will affect the investments necessary to take local to the next level is unclear. Whether decisions critical to local will be made quickly is also unclear.

I would love to hear your thoughts… 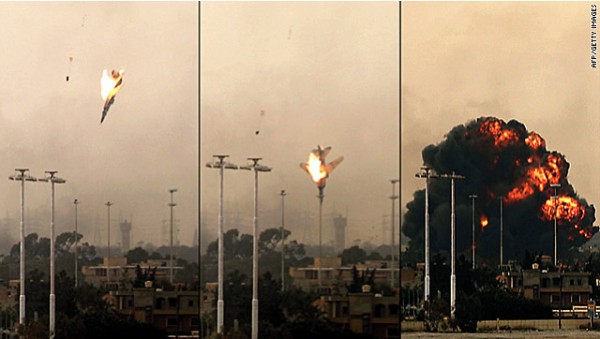 The French Defense Ministry, which confirmed the strike, said its attack aircraft being used to take out tanks and artillery have deemed Benghazi and the surrounding area an “exclusion zone.”

The French are using surveillance aircraft and two frigates in the operation to protect civilians. The aircraft carrier Charles De Gaulle will soon depart Toulon, France.

“Our air force will oppose any aggression by Colonel Gadhafi against the population of Benghazi,” said French President Nicolas Sarkozy, speaking after an international, top-level meeting in Paris over the Libyan crisis.
France convenes summit on Libya crisis
“As of now, our aircraft are preventing planes from attacking the town,” he said, calling the intervention a “grave decision.”

An opposition spokesman in Benghazi said Gadhafi forces that assaulted the city earlier Saturday are now positioned outside the town. However, the forces are preparing for more attacks.

Western and Arab allies were coordinating the use of military assets to thwart Gadhafi’s offensive.

Canada will be one of four principal partners helping to enforce the no-fly zone over Libya. Six Canadian CF-18 fighter jets are en route to an Italian base in Sicily and the HMCS Charlottetown will be in position to help with the naval blockade against Libya.

The United States continued to broadcast the message that it is a member of, and is assisting, the coalition, rather than taking the lead role.

“America has unique capabilities, and we will bring them to bear to help our European and Canadian allies and Arab partners to stop further violence against civilians including through the effective implementation of a no-fly zone,” Secretary of State Hillary Clinton said.

The United States is prepared to “defend its allies flying over Libyan airspace and enforce the no-fly zone,” a U.S. defense official told CNN.

The official said the United States is poised to launch cruise missiles from U.S. Navy warships currently in the Mediterranean Sea, and that these strikes would target Gadhafi’s air defenses.

Sarkozy said Gadhafi still has time to stop its activities. As of Friday, France, Britain, the United States and Arab League nations passed along a warning for Gadhafi to stop his operations immediately.

But “Gadhafi has totally ignored the warning” and “in the last few hours his forces have stepped up their deadly offenses,” Sarkozy said.

The international coalition meeting in Paris — which included Western and Arab partners — focused on how to take on a Libyan government bent on destroying the fledgling opposition movement under the U.N. resolution authorizing force to protect civilians against the Gadhafi government.

Speaking from Brasilia, Brazil, U.S. President Barack Obama said the international coalition was united. “Our consensus was strong and our resolve is clear. The people of Libya must be protected.”

Asked whether the decision to carry out bombing against Libyan forces could begin immediately after Saturday’s session ends, a senior State Department official said: “In terms of when the bombing starts, I’ll leave that for others to lay out at the appropriate time.

“Everybody recognizes the urgency,” he said.

Herman Van Rompuy, president of the European Council, said the European Union is ready to give a “new Libya” economic help and aid in building new institutions.

In Rome, Italian Prime Minister Silvio Berlusconi’s office confirmed to CNN that Berlusconi has proposed the use of the NATO base in southern Italy as a command center for allied action in Libya.

Clinton said despite talk of a cease-fire from Libya, Moammar Gadhafi “continues to defy the world.”

“His attacks on civilians go on,” she told reporters Saturday.

But after Gadhafi forces earlier Saturday assaulted Benghazi, the opposition said the military repositioned itself far outside the city.

Earlier Saturday, incoming artillery rounds landed inside the city, and pro-Gadhafi tanks rolled into the town firing rounds, witnesses said. Plumes of smoke rose in Benghazi as civilians said buildings came under small arms fire. Many fled their homes in fear of a full-blown assault there.

A flaming fighter jet plummeted from the sky, nose-diving to the ground. Khaled el-Sayeh, the opposition military spokesman, said the plane was an old MiG-23 that belonged to the rebels.

But as night fell over Benghazi on Saturday, the city became quiet and calm. While plumes of smoke could be spotted, the pro-Gadhafi tanks seen earlier were not in sight. El-Sayeh told CNN that “tens” have been killed in Benghazi on Saturday and opposition forces found 13 men clad in Libyan military uniforms bound and executed in a building that had been used by pro-Gadhafi forces to launch artillery assaults.

He said Gadhafi forces have withdrawn from the city and that they are now positioned 50 kilometers (31 miles) outside Benghazi on the road east to Ajdabiya. CNN could not independently verify those details.

In Tripoli, Gadhafi’s supporters took to the streets.

“I have all the Libyan people with me and I’m prepared to die. And they are prepared to die for me. Men, women and even children,” Gadhafi said in a letter addressed to Obama and read to reporters by a government spokesman in Tripoli on Saturday.

Fighting has raged in Libya over the last day despite the government’s announcement of an “immediate” cease-fire on Friday.

The declaration — which came hours after the U.N. Security Council resolution authorized the use of force, including a no-fly zone — was seen by rebels as simply a move to buy itself time.

Gadhafi — in a separate letter addressed to Sarkozy, British Prime Minister David Cameron and U.N. Secretary-General Ban Ki-moon — called the U.N. moves “invalid” because the resolution does not permit intervention in the internal affairs of other countries.

“Libya is not yours. Libya is for all Libyans,” said the letter, also read by the spokesman. “You will regret it if you take a step toward intervening in our internal affairs.

“It is not your country. We could never and would never fire one bullet against our people,” the letter said.

Violence has raged in Libya following protests calling for democracy and freedom and demanding an end to Gadhafi’s almost 42-year-long rule. It’s a conflict spurred by anti-government protest and resulting regime violence against civilians — which the U.N. resolution cites as “outrageous” and Sarkozy calls “murderous madness.”

But Gadhafi defended his actions in his note to Obama. He said his opponents are from al Qaeda in the Islamic Maghreb, the group’s North African wing, and asked Obama what he would do if such an armed movement controlled American cities.

“Tell me, how would you behave so I could follow your example?”

As talk emerged in Europe of speedy military action against Gadhafi’s regime, Obama on Friday warned Gadhafi to pull back from several besieged cities or face military consequences.

The civil war has hurt Libya’s oil production, which Shokri Ghanem, the nation’s oil minister, called “our most important source of income and our lifeblood.”

Speaking to reporters in Tripoli on Saturday, he said the abandoment of the work force amid the conflict is the main reason for a drop in production.

He said Libya wants to restore its fields and increase production. He stressed that Libya is honoring all its commitments despite the conflict and asked foreign and local employees to return. 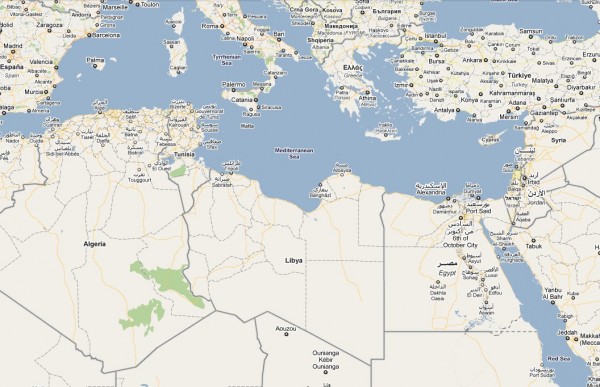