I’m a great fan of live real-time maps of city transit systems. There is something about watching trains moving in real-time on a map that really appeals to my inner geek.

This real-time Google Map of Munich’s S-Bahn shows the transit system’s trains live as they move around the city. Each train is represented on the map with a numbered map marker indicating which line it is travelling on.

You can click on any of the train markers and view its next stop and its destination station. It is also possible to click on any station on the network and view the times and destination of the next trains scheduled to arrive.

General Electric’s Points of Departure is a nicely designed Google Map showcasing the 6,000 most popular airports in the world. You can browse the airports by name, by the busiest airports, the most scenic or even view those situated on small islands.

Each airport is shown with Google Maps satellite view. Pictures from Flickr are also displayed beneath the map and their location shown on the map with map markers. The map also includes a permalink buttom that allows you to share your favourite map view.

Arek of the All Things Spatial blog has created a series of Google Maps to highlight social diversity in New South Wales, Australia.

The Australian Bureau of Statistics attempts to quantify socio-economic diversity for geographic locations with a suite of four summary measures called Socio-Economic Indexes for Areas (SEIFA). Arek has imported the Bureau’s data for the four measures into Fusion Tables and created a map for each.

Each map provides a heat-map visualisation of one of the measure. In each map you can click on any of New South Wales’ postal areas to view the area’s rank and decile.

London has today entered into the fantasy world of steampunk. In what seems like an episode from 2D Goggles a number of hot air balloons have been flying over London blasting out music to the populace below.

Don’t worry if you don’t live in London or if you have missed any of the balloons’ flights as you can replay it all on a handy Google Maps based application.

There is one year to go to the 2012 London Olympics. A number of events are being held in London to celebrate the occasion (including the flying of musical hot air balloons).

CASA is tracking all of today’s Twitter messages that include the hashtag ‘1yeartogo’ and have created a nice heat map of all the Tweets.

The map is actually a little sneak preview of a new heat map visualisation that will be made available to the general public in the next few weeks on MapTube. CASA are responsible for some of the best Google Maps tools (for example the CASA Image Cutter) so I can’t wait to play with this new heat map tool when it is released.

They Draw & Travel is a collection of wonderful user submitted hand drawn maps.

As part of the launch of the website a Marvellous Map competition was held with a grand prize of $1,000 for the winner and 5 runner-ups each receiving $200. The six winners of the competition will be announced on Friday.

The World Map lets you browse the 225 maps (so far) submitted to They Draw & Travel on Google Maps. You can click on any of the 225 map markers and view the hand drawn map submitted for that location.

Public transport directions for London has been added to Google Maps. If you want to get around in London you can now get transit directions that include the London Underground, DLR, buses and trams.

To get public transit directions in London on Google Maps you just need to select ‘Get directions’, type in your starting point and destination and click on the train icon that appears in the side panel.

The resulting direction will then tell you which underground station you need to go to and even which tube line you need to catch.

One Day on Earth

On 10.10.10 One Day on Earth asked people around the world to create a video of their world. The goal of the project was to “create an open shareable archive and documentary film of the world on 10/10/10.”

Whilst you wait for the finished full-length film to be released you can browse and watch the thousands of videos that were contributed around the world on this Google Map.

If you click on a map marker you can watch the selected video in the map sidebar. For each video you can view details, such as where and when it was shot and who by.

Seattle.gov have launched this ‘My Neighborhood’ include Crime reports Map.
The crime icons are based on initial police reports taken by officers when responding to incidents around the city. The information enters Seattle Police Records Management System and is then transmitted out to the Bing map.

Note: This data and their corresponding map icons will populated on the ‘My Neighborhood’ map within 6 to 12 hours after the report is filed into the system. 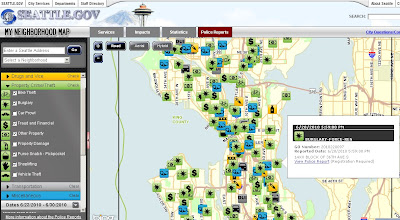 Use the left-hand side bar in choosing date (by calendar), types of crime (Crimes Against Persons, Drugs and Vice, Property Crime/Theft, Transportation & Miscellaneous sub- catergories). Advice is not to switch everything on at once.

About the data:
The mapped icons are based on police reports taken by officers when responding to incidents around the city. The time for an incident to show on the map is 12 hours after the report has been processed. However, the time for a report related to the event to be made available online can take 2-3 business days.

Important Note:
This map provides a good overview of reported activity going on in the Seattle neighborhood. The icons for these incidents are based on initial reports, however, and are subject to change as the investigation proceeds. For this reason, the mapped incidents will not match monthly crime statistics and will not provide a true measure of safety or crime in an area.

Using the ‘Impacts’ tab on the map will change from crime to Fire Incidents (with covers medicial) assistance – this map is updated every 2 minutes.

In terms of 3D buildings, The Hague, Netherlands is quite barren. There are buildings that pop up in various places around the city, but the overall coverage is rather low. 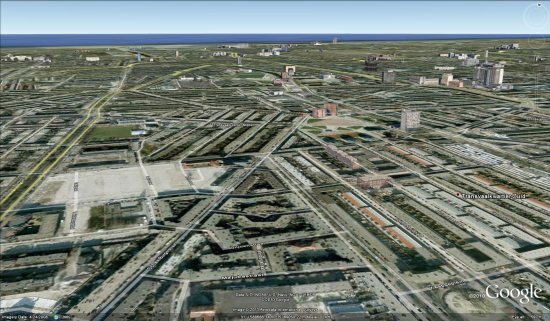 However, back in December the city was added to Google’s Building Maker tool, which enabled many more people to quickly create 3D models in the city.

To help facilitate the modeling and get the city built out as quickly as possible, Google and Design8 are putting together a workshop next month to help teach users how to create buildings using Building Maker and SketchUp. The workshop will be held at the Delft University of Technology, just a few miles from The Hague. If you’re in the area, you can sign up for the workshop here.

The goal of the workshop is to help each volunteer model 10 buildings, which should accumulate to some excellent city-wide coverage once all of those models go live.

Google has been doing various “Model Your Town” events for over a year now, and the results have been very encouraging. More than 400 locations have joined the “Model Your Town” program, and last year they named Barranco – Lima, Peru as the first winner of the contest.

There are certainly some talented modelers that have been working on locations in The Hague, and hopefully this event will inspire them to model even more. For example, check out the excellent model below: 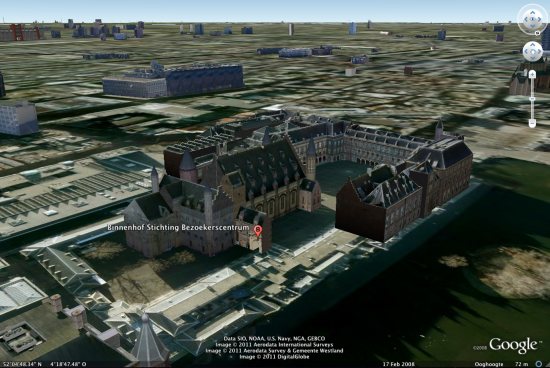 We’ll have to check back in with The Hague in a few months to see what kind of progress this workshop has been able to inspire. If you’re fortunate enough to be able to attend, please let us know how it goes!