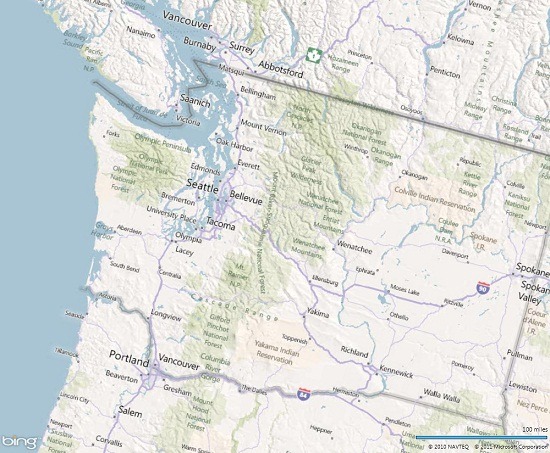 This year at the Game Developers Conference (GDC) Online we have organized a Developer Day on Oct. 10th full of Google information for game developers. It will feature hardcore technical information on Google products and platforms delivered by Google engineers and developer advocates. We’ll discuss the latest projects we’re working on and how our online technologies can help you better create, distribute, and monetize games that reach a larger audience than ever before. We’ll present everything from how developers can build hardware accelerated 3D games for the browser with WebGL to the game framework used to bring Angry Birds to the Web.

In addition to the Developer Day, we will also have a booth on the Expo floor on Oct. 11th-12th where we’ll have representatives from the Chrome Web Store, Native Client, WebGL, App Engine, Google+, In-App Payments, Google TV, and AdSense/AdMob demoing technologies and platforms for game developers. Come by booth 503 to try out Google products and ask questions, or hang out in our Google TV lounge.

For more information on our presence at GDC Online, including session and speaker details, please visit http://www.google.com/events/gdc/2011. Hope to see you in Austin!

Not able to attend GDC? Check out Google Game Developer Central to get an overview of Google products and services that are particularly relevant to game developers.

Pseudolocalization is the automated generation of fake translations of a program’s localizable messages. Using the program in a pseudolocale generated in this manner facilitates finding bugs and weaknesses in the program’s internationalization. Google has been using this technique internally for some time, and has now released an open-source Java library to provide this functionality at http://code.google.com/p/pseudolocalization-tool/.
Take a look at the following screenshot and see if you can spot the internationalization problems:

Some common problems in localizing applications are:

Using untranslated LTR messages in an RTL user interface is problematic because it masks real problems and creates apparent problems where none actually exist. Just setting dir=”rtl” on the HTML element of an otherwise-English UI produces something like this:

Note how some of the punctuation is misplaced and not mirrored, the radio buttons are a mess, and the order of the menu items isn’t mirrored. None of these happen to be real problems — they will disappear when the English strings are replaced with real translations.

The solution is the fakebidi pseudolocalization method, which takes the original source text and adds Unicode characters to it to make it behave just like real RTL text while remaining readable (though backwards).

We find the most useful combinations of pseudolocalization methods to be accents/expander/brackets for finding general internationalization problems, and fakebidi for finding RTL-related problems. We use BCP47 variant subtags to identify locale names that get pseudolocalized translations: psaccent (as in en-psaccent) gets the accents/expander/brackets pseudolocalization, and psbidi (as in ar-psbidi) gets fakebidi. Note that for psbidi, using a real RTL language subtag is recommended since that will trigger RTL handling in most libraries/frameworks without any modifications. We hope to get these variant tags accepted as standard.

We have taken the sample application from above and run its translatable text through psaccent and psbidi pseudolocalization. Now take a look and see how much more easily internationalization problems can be identified: 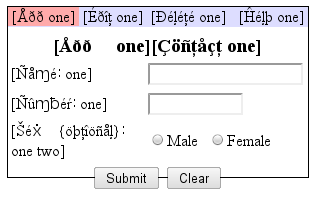 Note that three problems have been revealed by the use of psaccent:

We can fix those problems, then check for Bidi problems by using psbidi: 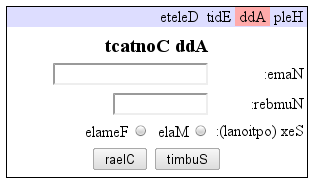 Notice this doesn’t introduce problems that aren’t there like the earlier example, but it does show that the Help menu item does not float to the left side of the window as it should.

Initially, this is just a library for use with other tools. We plan to write a command-line tool for taking message sources and producing fake translations of them. In addition, we are in the process of integrating this library with GWT, so GWT users can take advantage of it just by inheriting one module.

In summary, pseudolocalization is useful for finding internationalization problems early in the development process and enabling the developer to fix them before wasting money on translations that may have to be changed to fix the problems anyway. We hope you will use this library to help make your application usable by more people, and we welcome contributions and discussions at https://groups.google.com/forum/#!forum/pseudolocalization-tool.