Today we’re excited to announce some updates to the official Google Reader app for Android. Over the last couple of months, we’ve added some of your most-requested features:

Unread count widget – choose any feed, label, person, or “all items” and get the unread count on your home screen. Clicking on the widget takes you to straight to that stream. 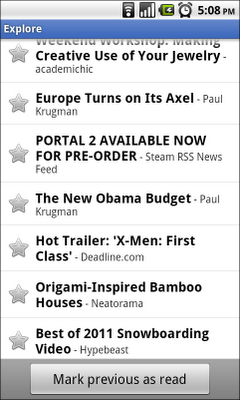 In addition to these new features, we now have an official Russian translation as well.

Application enables users to monitor RSS feeds through your mobile phone.Google Reader Android allows for synchronization with desktop computers, has big buttons with pictures and a cumbersome interface. It enables users to enjoy the publications to share in the application or e-mail to other devices and users.

Applications can be downloaded from the Android Market.

Currently no information whether the application will appear for the iPhone, but now there are applications like NetNewsWire, Pulse and Reeder, who maintain Google Reader subscriptions.