Offroad Navigation App for android with Russian topographic military maps at scales from 1:100.000 to 1:500.000. For many countries in Europe, Africa and Asia these maps belong still to the best available topomaps. 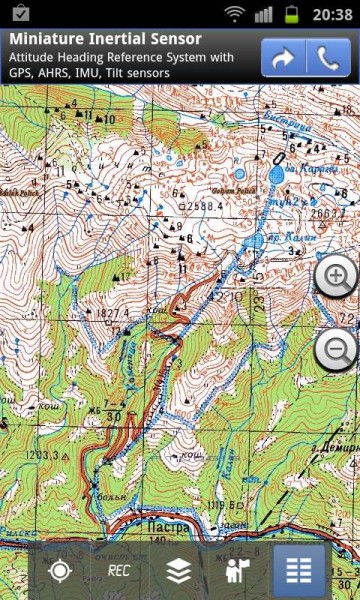 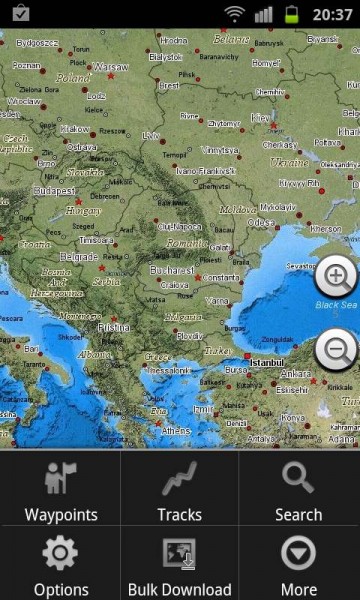 Usually I’m preparing custom maps using Genshtab’s Soviet military maps and other apps like Androzic or OziExplorer for android, but guys, this is an incredible app. And using bulk downloader of map tiles – there is no other app like this.

Soviet Military Maps is the perfect moving map app for offroad trips, adventure travels and expeditions. You are planning cross country trips to Sahara by 4×4/motorbike or a trekking tour to the Himalayas ? With the Russian topos you have always a great alternative to other map sources. Beneath the good topography the maps include many small trails and unpaved roads that are missing in other map sets.
Attention: The Soviet Military Maps were created mainly in the 80ies and are less interesting for industrialized countries. Outside Africa and Asia you’ll find the OSM/Google map layers more useful.
Please note: This app does not provide “Turn-by-Turn” – navigation nor route calculation. 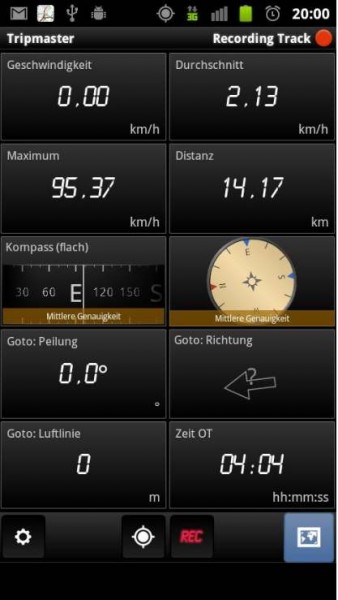 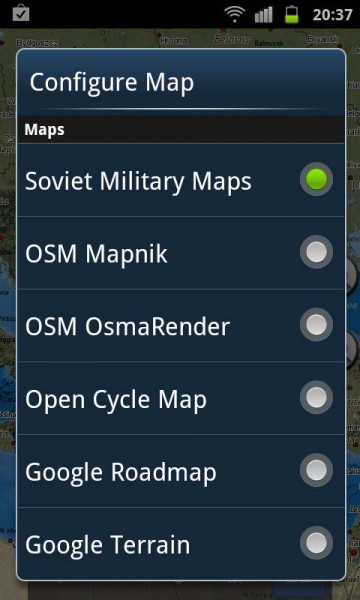 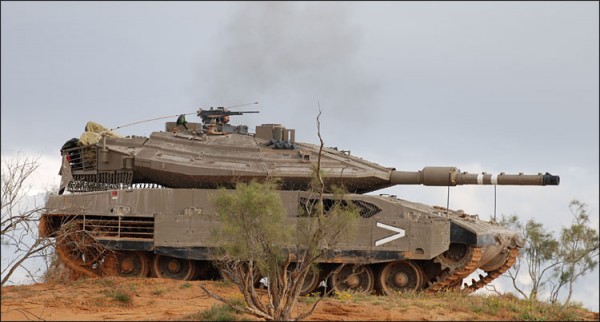 The IDF has begun to equip itself with the Merkava Mk-4 tank, which was completely developed in Israel and is considered one of the best tanks in the world. The new tank, a fourth generation of the Israeli tank, is currently in production, and is expected to enter operational status with a regular tank brigade, replacing older M-60 (Magach) tanks currently in service. It represents a sensible improvement over its three predecessors of the Merkava series, being a more lethal weapon on the one hand, and a safer vehicle for its crew, on the other. 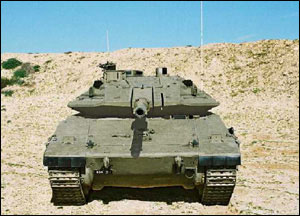 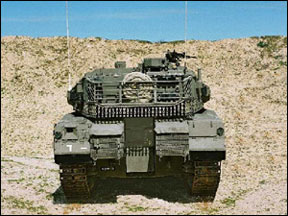 The Merkava Mk-4 includes innovations in all tank quality components – protection and survivability, firepower and mobility.

The principles on which the design of the Merkava tank family development was based have been applied again in the Merkava Mk-4. Priority has been given to protection and survivability, utilizing the tank’s systems for protecting the crew (the engine is installed in the front of the tank), with storage of ammunition in protected containers, automatic fire suppression system, an overpressure NBC system, and more.

Unique among the main battle tanks of the world, the Merkava design features a front-mounted power pack, which presents a heavy mass in the forward area, protecting the crew from enemy attack. Enemy fire directly striking the front of the tank, the most likely point of attack, is absorbed by the mass of the engine block, protecting the crew. This configuration also cleared room at the rear section for a safe exit and enough space to carry a few fully armed infantrymen, in addition to the crew. The rear access hatch allows for the quick and safe exit of injured crewmen or pickup of wounded soldiers for evacuation.

The Merkava is one of the best protected tanks in the world. Its advanced protective systems provide increased protection against penetration of APFSDS shells and all known ATGM’s, and its sensors are capable of detecting the launch of such missiles in advance, including laser-guided missiles. The tank’s is fitted with the Amcoram LWS-2 laser warning system, with threat warning display installed at the commander’s station. 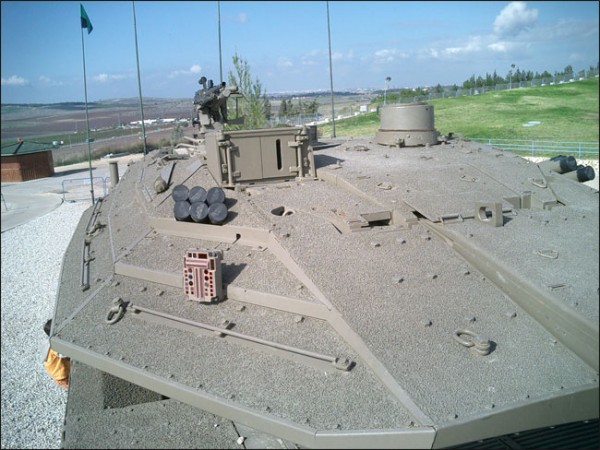 In the Merkava Mk-4, the ballistic protection is modular and provides more effective protection against modern threats, involving both protection efficiency and coverage area. Above all, the ballistic protection includes roof protection, which provides a capability against overhead attacks. The electromagnetic threat identification warning system is an advanced generation of its predecessor in the Mk-3. The turret and the hull are fitted with a modular armour system which can be changed in the field. The forward section of the turret is fitted with additional blocks of armour which provide extra protection against the latest generation of top attack anti-tank missiles. A skirt of chains with ball weights is installed on the lower half of the turret bustle. Incoming HEAT projectiles detonate on impact with the chains instead of penetrating the turret ring. Sprung armour side skirts protect the wheels and tracks.

The tank is equipped with a 120-mm gun that is an advanced generation of the type developed for the Merkava Mk-3. Its 120mm gun is also modified to sustain higher pressures, resulting in improved range and penetration performance. The new gun provides for firing of high-power munitions with increased penetrating capabilities. The ready-to-fire ammunition is stored in a protected compartment. The system allows the loader to semi-automatically select the desired ammunition type.

The tank’s new fire control system includes modern components, whose capabilities are very high in detection range and target acquisition. The night vision system is based on the world’s leading thermal technology. The automatic tracking ability has been significantly improved. The systems provide for the implementation of an effective combat doctrine in target acquisition, allocation and destruction by commander and gunner. The tank is equipped with a modern fire control and sighting system which includes computerized ballistic calculations and compensations, a dual axes stabilized gunner sight and a dual axis stabilized commander panoramic sight, both equipped with an advanced FLIR and TV channels for day and night operation. The system is equipped with an improved tracking system which enables tracking of moving targets, such as tanks, helicopters, vehicles or soldiers. It also enables locking the sight and gun on targets when the tank is on the move, utilizing the ultra-fast gun stabilization and electrical turret drive system. Merkava Mk-4 is believed to be protected by a new type of hybrid armour, which can be conformed from modular elements, to match specific threats. The Mk-4 retains the hull design of the previous Merkava versions.

The tank also utilize the Battle Management System (BMS) designed by Elbit Systems’ ElOp – the system is providing fast communication networking between the commander and subordinate units, and enables the crew to plan missions, navigate and continuously update their situation awareness. The system also enables recording and debriefing the operation, by utilizing the tank’s digital recorder. The Merkava Mk4 is equipped with the new VDS-60 digital data recorder produced by Vectop, it records and restores the sight images and observation data collected during the mission. The capture of such images can also be shared by other elements, which are networked with the BMS, to enable reporting of enemy targets. This concept is rapidly becoming an essential part of the “digitized land forces” integrated battlefield concept, combining tanks, anti-tank and combat helicopters in a combined task force at various levels. Each crew member has an individual flat-panel color displays showing the status of systems each member is responsible for. The gunner and commander can also see the sight images on their individual screens. The commander can use his display for map navigate, orientation and reporting.

For example, the driver can see a rear and side view of the tank from the closed compartment. This capability is derived from a new, and unique system called Tank Sight System, developed by Vectop. The system provides video coverage the tank’s surroundings in day and night. It improves safety, especially when traveling backwards and in conditions where the driver’s visibility is impaired. Merkava Mk 4 uses four cameras installed in hardened cases embedded outside the tank. These cameras are providing full peripheral view displayed on high resolution monitors installed at the driver’s position and in the fighting compartment.

Another feature provided by the “computerization” of the Merkava Mk4 is the introduction of “integrated training capability”, providing the crew and unit a sophisticated training environment based on their tanks and readily available in the field. This capability will be integrated with the “virtual scenario” a set of virtual terrain features, friendly and enemy elements, and “intelligent” behaviors based on pre-set maneuvers, doctrinal concepts etc. All will be presented to the tank crew, and unit members, through their observation systems, sights and sensors, to support a comprehensive training scene in the field.

The 60 millimeter mortar system, which is a large caliber gun with a low muzzle velocity, is capable of firing high explosive rounds and illumination bombs. The crew can load, aim and fire the mortar system from within the turret. The mortar system is developed by Soltam Limited of Haifa. 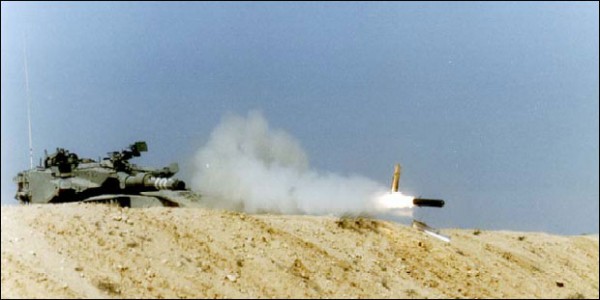 A series of live firing tests of the LAHAT – Laser Guided anti-tank missile developed by IAI/MBT (Israel Aircraft Industries-MBT Division) included the firing of 120mm missiles, adapted for smooth-bore guns used on Merkava Mk3, Merkava Mk4, Leopard 2A5/6 and M1A1/A2 Abrams tanks. The missile is also designed for employment from launch tubes, where it could be deployed from fixed positions, light vehicles or APC’s. The missile’s trajectory can be set to match either tank (top attack) or helicopter (direct attack) engagement. Finally, the missile uses a tandem warhead which can defeat modern armour and reactive panels. The main warhead has a high penetration capability, defeating all known armored vehicles at high impact angles typical of top attack trajectories.

The Merkava Mk-4 tank is equipped with a modern engine. This is a 1,500 horse power American-built diesel engine, controlled by a computer connected both to the driver’s panel and to the modern automatic transmission system, affording the tank greater power than the previous version, which has a 1,200-horsepower engine. Some of the new models have already covered more than 10,000 kilometers in field tests. The engine and transmission constitute a power pack that is considered a world leader. The great power of the engine, in conjunction with the strong suspension based on that of the Mk-3, provide the tank with high mobility and maneuverability. The installation of the new power pack in the Merkava tank has allowed for a redesign of the hull in a way that has improved frontal protection and the driver’s field of view. For improving reverse driving, a camera has been developed which enables the driver to look behind the tank while driving backwards without requiring commander or ground direction.

According to the tank’s designers, headed by the progenitor of the Merkava, Maj. Gen. (res.) Israel Tal, the fourth generation represents a quantum leap forward. Part of the revolution lies in the fact that the tank will, for the first time, be equipped with full perimeter defense, both vertical and horizontal. This, combined with an advanced observation and control system, will enable the tank commander to function from the turret with full protection from external threats such as anti-tank missiles.

The engine pack is easily replaced. The tank is powered by the new General Dynamics GD833 1,500-horsepower direct injection, liquid cooled diesel engine, (co-produced in the USA by General Dynamics and MTU). This type is also powering the French Leclerc MBT. This powerful weighs 1.9 tons net, and 4.9 tons with its entire power-pack. This powerful engine affords the tank greater mobility than the previous versions, which had the 900 and 1,200-horsepower engines. The tank utilizes an electric turret and gun control system, designed by Elbit Systems, which comprises two electrical brushless motors, produced by Bental Industries.

The Merkava Mk-4 is expected to be equipped with an active full perimeter defense, which utilizes, among other capabilities, warning against laser-guided threats. The Mk-4 like its predecessors, is also equipped with a central filtering system designed by Kinetics, which maintains positive air pressure at the fighting compartment, for protection in a chemical biological and radiological (CBR) environment. The system also provides air conditioning for individual crew members (micro-cooling) and for the entire cabin, as well as auxiliary power when positioned at “silent watch” for battery recharging. 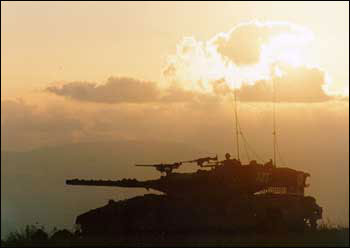 This video teaches you how to find these three UFOs at Area 51. Understand this information has just now hit the public because of me, so it will be a matter of about 3 months or less before Google sees this video and deletes the UFOs from their satellite mapping system. From the other UFOs revealed using Google map, that is my experience.