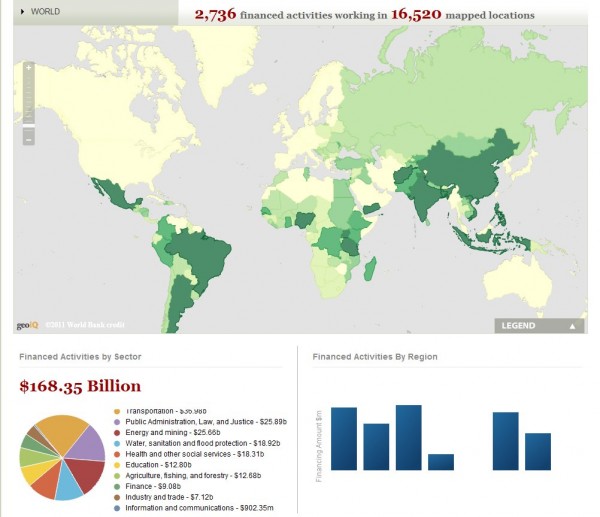 The Mapping for Results Platform provides detailed information about our work to reduce poverty and promote sustainable development around the world. This pilot website aims to visualize the location of our projects and to provide access to information about indicators, sectors, funding and results.
Prior to the Spring Meetings 2011, Mapping for Results has identified more than 1250 active Bank financed activities working in 16,520 locations. These activities are a subset of more than 2,500 active financed Bank activities with a volume of more than $160 billion.

Today we’re announcing a new version of the Android platform — Android 2.3 (Gingerbread). It includes many new platform technologies and APIs to help developers create great apps. Some of the highlights include:

Rich multimedia: To provide a great multimedia environment for games and other applications, we’ve added support for the new video formats VP8 and WebM, as well as support for AAC and AMR-wideband encoding. The platform also provides new audio effects such as reverb, equalization, headphone virtualization, and bass boost.

New forms of communication: The platform now includes support for front-facing camera, SIP/VOIP, and Near Field Communications (NFC), to let developers include new capabilities in their applications.

For a complete overview of what’s new in the platform, see the Android 2.3 Platform Highlights.

Alongside the new platform, we are releasing updates to the SDK Tools (r8), NDK, and ADT Plugin for Eclipse (8.0.0). New features include:

Integrated ProGuard support: ProGuard is now packaged with the SDK Tools. Developers can now obfuscate their code as an integrated part of a release build.

Preview of new UI Builder: An early release of a new visual layout editor lets developers create layouts in ADT by dragging and dropping UI elements from contextual menus. It’s a work in progress and we intend to iterate quickly on it.

To get started developing or testing applications on Android 2.3, visit the Android Developers site for information about the Android 2.3 platform, the SDK Tools, the ADT Plugin and the new NDK.

Check out the video below to learn more about the new developer features in Android 2.3.

[Cross-posted from the Google.org blog]

Today, we launched a new Google Labs product called Google Earth Engine at the International Climate Change Conference in sunny Cancun, Mexico. Google Earth Engine is a new technology platform that puts an unprecedented amount of satellite imagery and data—current and historical—online for the first time. It enables global-scale monitoring and measurement of changes in the earth’s environment. The platform will enable scientists to use our extensive computing infrastructure—the Google “cloud”—to analyze this imagery. Last year, we demonstrated an early prototype. Since then, we have developed the platform, and are excited now to offer scientists around the world access to Earth Engine to implement their applications.

Why is this important? The images of our planet from space contain a wealth of information, ready to be extracted and applied to many societal challenges. Scientific analysis can transform these images from a mere set of pixels into useful information—such as the locations and extent of global forests, detecting how our forests are changing over time, directing resources for disaster response or water resource mapping.

The challenge has been to cope with the massive scale of satellite imagery archives, and the computational resources required for their analysis. As a result, many of these images have never been seen, much less analyzed. Now, scientists will be able to build applications to mine this treasure trove of data on Google Earth Engine, providing several advantages:

Google Earth Engine can be used for a wide range of applications—from mapping water resources to ecosystem services to deforestation. It’s part of our broader effort at Google to build a more sustainable future. We’re particularly excited about an initial use of Google Earth Engine to support development of systems to monitor, report and verify (MRV) efforts to stop global deforestation.

Deforestation releases a significant amount of carbon into the atmosphere, accounting for 12-18% of annual greenhouse gas emissions. The world loses 32 million acres of tropical forests every year, an area the size of Greece. The United Nations has proposed a framework known as REDD (Reducing Emissions from Deforestation and Forest Degradation in Developing Countries) that would provide financial incentives to tropical nations to protect their forests. Reaching an agreement on early development of REDD is a key agenda item here in Cancun.

Today, we announced that we are donating 10 million CPU-hours a year over the next two years on the Google Earth Engine platform, to strengthen the capacity of developing world nations to track the state of their forests, in preparation for REDD. For the least developed nations, Google Earth Engine will provide critical access to terabytes of data, a growing set of analytical tools and our high-performance processing capabilities. We believe Google Earth Engine will bring transparency and more certainty to global efforts to stop deforestation.

Over the past two years, we’ve been working with several top scientists to fully develop this platform and integrate their desktop software to work online with the data available in Google Earth Engine. Those scientists—Greg Asner of the Carnegie Institution for Science, Carlos Souza of Imazon and Matt Hansen of the Geographic Information Science Center at South Dakota State University—are at the cutting edge of forest monitoring in support of climate science.

In collaboration with Matt Hansen and CONAFOR, Mexico’s National Forestry Commission, we’ve produced a forest cover and water map of Mexico. This is the finest-scale forest map produced of Mexico to date. The map required 15,000 hours of computation, but was completed in less than a day on Google Earth Engine, using 1,000 computers over more than 53,000 Landsat scenes (1984-2010). CONAFOR provided National Forest Inventory ground-sampled data to calibrate and validate the algorithm.