“I’m not the sort of person
who fears failure.”

Comfort. Risk. Both are enjoyable.

One we strive to create. One we try to minimize.

We’ve discussed how flooding can be visualized a few times in Google Earth, because it’s a great medium with which to show off catastrophes such as that. In addition to helping with fresh imagery from recent floods in Pakistan and Nashville, it’s also been used to help bring to life the 1966 flood in Florence and an animation of how rising sea levels would affect various cities.

Today’s post comes from Richard Treves over at Google Earth Design. He’s recently read Will Self’s “Book of Dave“, which imagines a future where sea levels have risen over 100 meters.

Richard has taken that idea and given step-by-step instructions on how to simulate a 100m rise in sea level for any area of the world. I took his example and put it over London, with the results seen here: 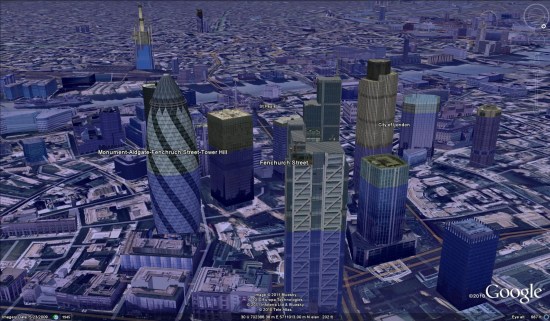 To view that file in Google Earth, you can download this KMZ file

It’s a great way to visualize something like this, and Richard put together a great guide for it. However, I’d like to make one small correction. In step #4, he advises choosing “Relative to Ground” for the water level. While this will put water 100m deep in the area you choose, it’s not necessarily representative of a 100m rise in sea level. Instead, choose “Absolute” in step #4 (as I did in the KMZ above) to see what it would be like if the sea level rose 100m world wide.

As Richard mentions, and as you’ll see in the screenshot above, leaving 3D buildings turned on is a great way to see the scale of the depth of water. Check out his blog and go try it for yourself.