Until now, CSE has had a simple collaboration feature that lets the owner of a custom search engine invite friends or colleagues to contribute sites, and assign labels to these sites. This was useful in expanding the scope of a search engine, but beyond expanding indexing, it limited what collaborators were able to do. 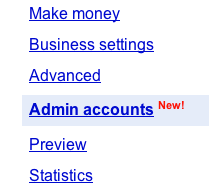 We hope you’ll find these shared admin capabilities more powerful. Let us know what you think in our discussion forum.

Today, I am presenting at the sixth GetListed.org Local University in Portland, Or. If you are coming PLEASE take a moment to introduce yourself as I would love to meet you.

For those of you that attended the presentation these links will provide background information and details for a pathway to dig deeper into the world of managing your listing on Google Maps. For those of you that are not in attendance, the links provide a good overview of critical base line ideas and tactics that every local campaign should embrace.
Google Maps – Its not your mother’s yellow pages.

Matt McGee needs little introduction to most readers here. He has been involved, perhaps longer than I, in the local space as a consultant, practitioner and writer and was one of my first virtual friends in the space. I have had the good fortune to have had Matt become a real friend and we often “tour” together with GetListed Local University. He maintains his own blog Small Business Search Marketing, is Executive News Editor at Search Engine Land and a moderator and editor at Sphinn.

His sense of internet marketing is keen and one that I listen to and trust even if having him in my social graph at Hotpot skews the results to pizza.

I’ve been enjoying the previous articles in this series. I don’t agree with all the opinions on what was most important in 2010, but that’s surely part of the fun. I do agree that 2010 was a big year for the local industry. Marissa Mayer, one of the most important people at Google, was “promoted” to a position overseeing local and mobile. Google launched Places Search, a whole new take on local search results. Bing made some very cool upgrades to its maps product. Facebook took a real step into the local space with Facebook Places. And so much more. 2010 was a BIG year for local/mobile.

But for all the progress, I’m still struck by how undeveloped the space is as a whole. So, at the risk of having you call me “Debbie Downer” (that’s a Saturday Night Live reference, Professor), I’d like to list 10 things that are still missing, broken, or unsolved in local at the end of 2010.

1- Google Places is still filled with bugs, from merged listings to problems with reviews and so much more. I have a gut feeling that spam is somewhat better than it’s been, but there are so many more problems for such an important piece of the local puzzle.

2- It’s still borderline impossible for the average person to track local/”pack” traffic in Google Analytics. There have been several articles that teach semi-complicated methods for doing this, but those articles shouldn’t be needed.

3- On a related note, the Google Places business dashboard remains mostly useless. The data is several days old and the stripped-down referral keyword list remains often frustrating. It would be better for Places to integrate directly into Google Analytics.

4- Bing still doesn’t offer any stats in its Local Listing Center. Nor does Yahoo.

5- Google still appears to be much more interested in acquiring small businesses (as Google users) than they are in actually supporting the ones already in the fold.

8- Neither Google, Bing, nor Yahoo allow a local business to integrate their Facebook and/or Twitter content into local business listings. I think Citysearch is the only local provider that has this functionality. Why?

9- There’s still no real solution to the call-tracking dilemma. SMBs want/need to track calls, but multiple phone numbers wreaks havoc on the trust of your primary business listing.

10- Neither Google, Bing, nor Yahoo provide any review management tools inside the business listing dashboards.

I’ll stop there with a “thanks” to Mike for letting me contribute to this series, and a “thanks” to you for reading. Hopefully we’ll see some or all of these things improve in 2011.