Washington, D.C.-based band Bluebrain’s new album drops Friday, but not in the way one might think. It will be available on iTunes, but not in MP3 form — rather as a location-aware app that only works within the stretch of park in downtown D.C. called the Mall.

“The music changes and evolves based on your chosen path within the park,” says Ryan Holladay, one half of the band. (His brother, Hays, makes up the other half of the outfit.) “To do this, the app uses the phone’s built-in GPS capabilities.” The app features a map of the Mall that shows what locations are tagged with sound.


The album, titled The National Mall, contains about three hours of music that the brothers composed while traipsing around the area. “It was certainly the most amount of exercise I’ve ever gotten while making an album,” Holladay says.

The disc will not be available for standard download as a musical piece, since it will only work when one is standing in the Mall.

“Unlike a number of other music apps out there, this one isn’t a companion to a normal album or an app that gives you tour dates or things like that,” Holladay says. “It actually is the work itself. The music has been composed to work specifically in this landscape. So, for instance, at the Lincoln Memorial, as you ascend the steps up to the giant statue, the sound of bells increases to the point where, when you are standing at Lincoln’s feet, they are surrounding you.”

The music constantly changes as you wander around the park, Holladay tells us. Ascending the hill toward the Washington Monument, you’ll hear only a cello, then, gradually, violins, a choir, clapping, fireworks and drumbeats will come into the mix as you get closer to the obelisk.

At this point, you might be scratching your head (or pounding your fists, depending on your temperament) and inquiring: “Isn’t this some kind of stunt? How is this music?”

“We knew when we started working on the project that, in order for it be considered something more than just a novelty, we had to compose the best music we’ve ever made,” Holladay explains. “But more than that, it’s been exciting to compose music in a way that’s never been done before. We had to constantly think about everything we were writing, examining it from multiple angles asking ourselves ‘Does it work if a person is coming from this way? What about this way?’”

Granted, Bluebrain’s approach is original, but the idea of creating music in unconventional ways — made to be consumed in a specific manner — is hardly a new concept. Remember the Flaming Lips’s song “Two Blogs F**king,” which could only be listened to via 12 YouTube videos? And, before that, there was their albumZaireeka, which came in the form of four CDs to be played simultaneously. Music doesn’t always have to be a leanback, staid experience — sometimes it can be theatrical and kinetic and strange.

Sadly, many of us do not live in Washington, DC, so we won’t be able to check out the album as it should be heard (the app should be up on iTunes later tonight for anyone in the nation’s capital), but Holladay says that the band plans to compose similar apps in a variety of other locations as well.

“We’re actually starting work on Flushing Meadows in Queens, New York,” he says. “It’s the site of the 1964 Worlds Fair and has all these amazing, archaic looking structures that have been really a blast to compose to.”

One of the most exciting aspects of Google’s Android platform is the rapid release pace, so support for cutting-edge technologies can be included in the platform early on. As engineers, we’re excited about such features, because we like to tinker and test the limits of new technologies. But the real challenge is using these new capabilities to integrate easy-to-use features for end-users, so that everyone can be excited. The introduction of the Near-Field Communication (NFC) API in Android 2.3, accompanying the release of an NFC hardware feature in Google’s Nexus S, gave us the opportunity to do just that.

NFC is meant to send and receive small amounts of data. This data can be read from passive (non-powered) devices (e.g. credit cards or interactive posters), or active devices (e.g. payment kiosks). NFC can also be used to communicate between two NFC-equipped devices thanks to a protocol introduced by Google which defines a way for two active devices to exchange NFC messages that follow the NFC Data Exchange Format (NDEF) specification. This protocol (NDEF Push Protocol (NPP)) is implemented in Android 2.3.3 and beyond.

This new NFC/NPP capability enables the exchange of a few hundred bytes of information in a well-defined format between devices, using proximity as a method for instigation and authentication. In other words, we can now share a small amount of data between two devices without going through the normal steps of pairing or association that are required by more conventional (and higher-bandwidth) avenues like Bluetooth or WiFi—the fact that the two phones are in close proximity is enough evidence to convince the NFC software that the devices are eligible to receive information from each other.

The NFC API for Android handles all of the details of receiving and parsing NFC messages. It then decides what to do with the message by investigating the intent filters registered for applications on the device. In some cases the messages may have characteristics that can lead to finer-grained dispatching. In the case of an NDEF message, you can register for NFC messages at varying levels of detail: from as vague as any NDEF message to as detailed as an NDEF message containing a URI matching a given pattern. A pleasant result of this approach is that the operating system can have “catch-all” applications for messages that have unknown details. 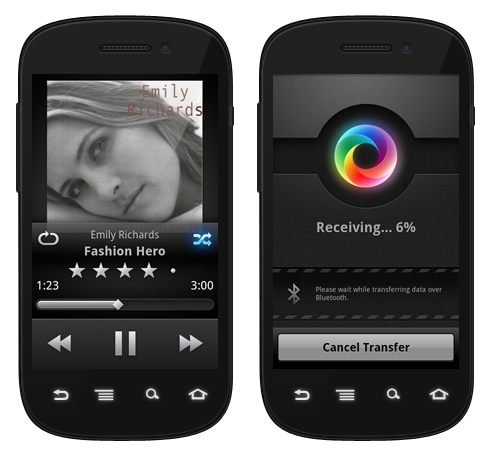 Let’s consider a possible application of the NFC technology in the context of the doubleTwist app. If you’re listening to a song and you want to share the details of the song with your friend, how can NFC help with this? Well, we can use NFC to bundle up a small bit of information about the song in a well-defined format, which the other phone can then parse and use to display information about the song. We will pass the metadata in a single NDEF Record containing a JSON object.

To ensure that our message is routed to doubleTwist on the receiving phone, we rely on Android’s ability to dispatch messages based on the data type of the payload, signaled by setting the the type name field to TNF_MIME_MEDIA. This indicates that the type field of the NDEF record should be a MIME type as specified by RFC2046. To take advantage of this capability, we create our own custom MIME type to use in the type field. Since the NDEF message must be composed of bytes, we’ll also need to convert the strings into byte arrays. The code for all of this looks like this:

Similarly, our application registers an Intent filter to define the Activity that will handle NFC messages that match this mime type. So, when another phone running doubleTwist receives our message, doubleTwist will have priority in processing the message. To do this, we add an element to AndroidManifest.xml‘s entry for the activity that should launch to handle this NDEF message:

The SongInfoShare activity will be started whenever the NFC radio receives our special message from another NFC-capable phone. In the onCreate method for this activity, we can check the action for the intent that started to activity to verify that it’s the NDEF_DISCOVERED action, and then use the normal intent helper methods to get the NFC message data from the Intent. Here’s what the code will look like for our info-sharing example:

So, now we’re able to easily pass along song information to a friend by simply bringing the NFC radios close together. No cutting, pasting, tapping, or searching for options in menus!

So, what happens if our friend isn’t running doubleTwist? Well, the stock Android NFC handler app can help us. It will display any text or link records contained in the NDEF message it receives. So, for example, we can also share a pre-formatted link that will do a Google search for the song information. To achieve this, we can modify the end of our first code example as follows:

Now, in the case where the receiving user doesn’t have doubleTwist installed, they will at least be presented with a link that they can click on to begin a Google search for more information about the song.

The first version of Google’s NDEF Push Protocol API has allowed us to bring some novel enhancements to our app using one of the newest available handset technologies. We are looking forward to further development of device-to-device NFC APIs that will allow even richer inter-device communication using just a tap!