Map of the Week: Airbnb

Why we like it: Airbnb has created a really great ‘search by map’ interface for their vacation rentals services. There’s also a really nice implementation of Google Street View to help renters make an informed decision about the rental and the surrounding neighborhood.

For a lot of people, the months of June, July, and August mean vacation time. As the price of just about everything rises, it can be difficult to find a unique and exciting place to stay within your budget. Luckily there’s Airbnb, which is a great way to find short-term accommodations rented out by private parties.

When it comes to finding the perfect place to stay, location is everything and Airbnb has invested heavily in creating mapping tools to make the right connections. A nice feature of the website is the ability to search by map for places to rent. The search interface is intuitive and easy to use. 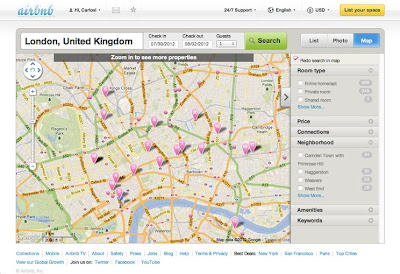 For security reasons, you aren’t able to know the exact property or the exact address, but Airbnb places you in the right neighborhood so that you can use Street View to get a better idea of what’s around. A nice added UI feature is a “Rotate Street View” button, which automatically glides the imagery around the neighborhood. 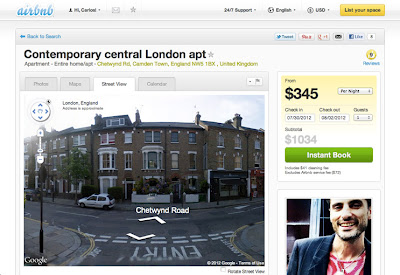 Airbnb is a global operation and there’s a Google Map for everywhere there are Airbnb rentals (which is just about every corner of the globe). So wherever you’re travelling, there’s a good chance that Airbnb has rental for you and Google Maps API tools to help you find it. Good luck and safe travels on your next vacation!

I really like the historical imagery feature in Google Earth. It’s a very useful feature that allows you to look at some neat things, and it’s a great way to visit the past in various areas around the world.

As reveled in a thread in the Google Earth Hacks message board by ‘Munden’, there are some signs that perhaps a “historical imagery” view is coming to Google Street View in the future.

He’s found a number of areas that have multiple Street View imagery versions available online, and he cites a handful of examples such as this building that looks like a giant sheep. Here is the old image, here is the new image, and here is what they look like side-by-side:

In his testing, Munden has discovered some interesting things:

In New Zealand, old imagery isn’t the default but isn’t removed anymore. My old links will call up the old low resolution images, even on browsers that have never seen that URL before. I’ve even cleared the caches. Google definitely has the old images in their Street View database. You can switch by dragging the Pegman by a pixel or two and suddenly you’ll be in the new imagery and stay there no matter how much moving around you do.

It’s important to note that once you are viewing an older image if you use the SV in-picture arrows to move through the pictures, you will stay in that older imagery. You have to drag the Pegman to switch to new imagery, as I mentioned previously. This could simply be an artifact of the old URL, and they have no plans to create a history of Street View of course. I find it most interesting that you STAY in the old imagery once you’re viewing it though.

Other examples include a futuro home (old image, new image), or the “Christmas decorations” location that ‘sladys’ found — the new imagery is embedded on the site, but the old imagery can still be found via this URL.

Ultimately, all of this might not mean anything. Google hasn’t made any announcements about anything related to historical Street View imagery and they may have other reasons for keeping the old imagery accessible. In any case, it’s a neat little feature that Munden has uncovered and may be a sign of things to come.