This session at Google I/O demonstrated how developers can take advantage of new and little known GIS capabilities in all of our geo services.

We started out showing some of the GIS capabilities in Google Maps API, which amongst other features, lets you calculate distances and angles and overlay map tiles in arbitrary projections. 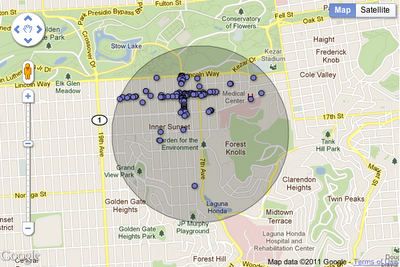 Moving onto some new and upcoming products, we showed off some of the capabilities of Google Earth Builder, a new platform to manage and publish large amounts of raster and vector GIS data.

In the world of data visualization, previous sessions had showed off new styling features for Fusion Tables. In this session, we showed how you can enable spatial queries on your data, displaying maps and statistics for the closest set of features to a location, or all features within an arbitrary radius.

Google Earth Builder is not the only new product that provides access to our infrastructure for working with large GIS datasets – we also talked about Google Earth Engine. This Google.org project is designed to help scientists easily access massive archives of satellite imagery, and run image analysis and other algorithms on the data within Google’s datacenters. Complex analyses that might take months or years to run on a single machine can now be completed in hours or minutes.

Finally, we showed off some ways you can integrate open source technology, and finished off the session with Brian Flood from Spatial Data Logic, who demonstrated a great example of the kind of GIS services that developers can build using Google’s Geo API’s.

Check out the video to see for yourself, and thanks for reading our Geo API’s Summer Learning Series.