Larry Page took over as CEO of Google at the beginning of the week. Immediately thereafter, Google’s product head Jonathan Rosenberg resigned.

Late Yesterday it was reported in an LA Times exclusive that Page has completed a major reorganization at Google that put key executives in charge of their individual business units and reporting directly to him.

From the article (bolds mine):

The executives will be able to act more autonomously and won’t have to turn to Google’s powerful operating committee on every decision.

The structure certainly begs the question: Where’s Local in all of this?

In mid October it was reported that Marissa Meyer had taken on a new role in charge of geo and local. More importantly it seemed, in being promoted to the operating committee it was noted that her voice and focus on local would be more widely heard. Now we learn that the operating committee will take on less of a product role and  that Local, Geo and Maps are not in their own product category.

One presumes that Geo- Local  will once again fall under the broad aegis of search and that Mayer will report to Alan Eustace. Although much of local is also social (Hotpot, Latitude). At least on the surface, it appears that Local (and perhaps Meyer) has been demoted. At best, it implies confused lines of authority.

Whether it will affect the investments necessary to take local to the next level is unclear. Whether decisions critical to local will be made quickly is also unclear.

I would love to hear your thoughts…

Search using your location is extremely helpful while on the go. Today, we’re excited to announce Meow Me Now, a new feature that lets you find the kittens that are near you. You can find kittens either by searching for [kittens] on google.com on your Android or iOS device, or by using the Near Me Now drop-down feature on the Google homepage. 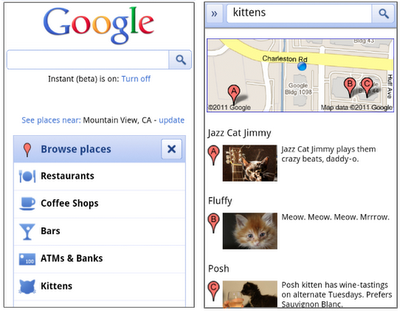 Voice search to locate nearby kittens will also work on Android devices, and iOS devices with the Google Search App, so try meowing into your phone to find the kittens near you.