867-5309 could be one of the most iconic phone numbers of all time, but it’s not the only number that a lot of us remember by heart. Many of us have a phone number that we’ve shared with family, friends, and contacts over the years and are reluctant to let go.

One of the most frequent requests we hear from people who use (or want to use) Google Voice is that they’d like to get all of Google Voice’s features without having to give up their long-time phone numbers.

Today, we’re excited to announce that Number Porting is available for all existing Google Voice users. This means you can make the mobile number you’ve always used your Google Voice number, so it can ring any phone you want—or even your computer.

Porting your number to Google Voice costs $20 and is usually completed within 24 hours. You may incur additional charges, including early termination fees, from your wireless carrier. Contact your carrier to get more details about the charges applicable to you.

After porting your number to Google Voice your mobile service plan will be cancelled, and there are a couple of steps that you’ll have to take to continue making and receiving calls on your mobile device. For more detailed instructions on how Number Porting works and to find tips for making the process as smooth as possible, visit the Google Voice Help Center.

Number Porting is currently available for existing Google Voice users and will become available to new users within the next few weeks, and at this time, Google Voice is available in the U.S. only.

From c-base in Berlin to the Ice Bar in Stockholm, from four courses of pasta in Florence to beer and pretzels in Munich, and from balalikas in Moscow to metal cage mind puzzles in Prague – one common theme was the enthusiasm and quality of the Android developers in attendance. You guys are epic.

For those of you who couldn’t join us, we’re in the middle of posting all the sessions we presented during this most recent world tour. Stand by for links.

We kicked off our conference season at Droidcon UK, an Android extravaganza consisting of a bar camp on day 1 and formal sessions on day 2. It was the perfect place for the Android developer relations team to get together and kick off three straight weeks of Google Developer Days, GTUG Hackathons, and Android Developer Labs.

The first of our Android Developer Labs was a return to Berlin: home to c-base (a place we never got tired of) and the Beuth Hochschule für Technik Berlin. This all day event cost me my voice, but attracted nearly 300 developers (including six teams who battled it out to win a Lego Mindstorm for best app built on the day.)

Next stop was Florence which played host to our first Italian ADL after some fierce campaigning by local Android developers. 160 developers from all over Italy joined us in beautiful Florence where the Firenze GTUG could not have been more welcoming. An afternoon spent with eager developers followed up by an evening of real Italian pasta – what’s not to love?

From the warmth of Florence to the snow of Stockholm where we joined the Stockholm GTUG for a special Android themed event at Bwin Games. After a brief introduction we split into six breakout sessions before the attendees got down to some serious hacking to decide who got to bring home the Mindstorm kit.

The Google Developer Days are always a highlight on my conference schedule, and this year’s events were no exception. It’s a unique opportunity for us to meet with a huge number of talented developers – over 3,000 in Europe alone. Each event featured a dedicated Android track with six sessions designed to help Android developers improve their skills.

It was our first time in Munich where we played host to 1200 developers from all over Germany. If there was any doubt we’d come to the right place, the hosting of the Blinkendroid Guinness World Record during the after-party soon dispelled it.

Moscow and Prague are always incredible places to visit. The enthusiasm of the nearly 2,500 people who attended is the reason we do events like these. You can watch the video for every Android session from the Prague event and check out the slides for each of the Russian sessions too.

With everyone in town for the GDDs we wanted to make the most it. Working closely with the local GTUGs, the Android and Chrome teams held all-day hackathon bootcamps in each city the day before the big event.

It was a smaller crowd in Moscow, but that just made the competition all the more fierce. So much so that we had to create a new Android app just for the purpose of measuring the relative volume of applause in order to choose a winner.

If a picture is a thousand words, this video of the Prague Hackathon in 85 seconds will describe the event far better than I ever could. What the video doesn’t show is that the winners of “best app of the day” in Prague had never developed for Android before.

In each city we were blown away by the enthusiasm and skill on display. With so many talented, passionate developers working on Android it’s hard not to be excited by what we’ll find on the Android Market next. In the mean time, keep coding; we hope to be in your part of the world soon.

On To South America

[Thanks, Reto. This is Tim again. The South American leg actually happened before the Eurotour, but Reto got his writing done first, so I’ll follow up here.]

We did more or less the same set of things in South America immediately before Reto’s posse fanned out across Europe. Our events were in São Paulo, Buenos Aires, and Santiago; we were trying to teach people about Android and I hope we succeeded. On the other hand, I know that we learned lots of things. Here are a few of them: 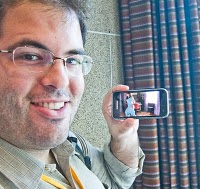 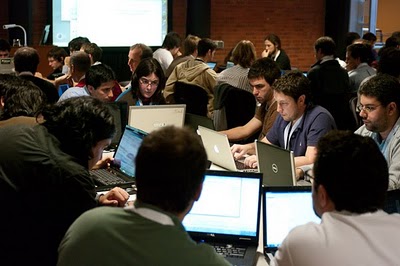 The people were so, so, warm-hearted and welcoming and not shy in the slightest and I can’t think about our tour without smiling. A big thank-you to all the South-American geeks and hackers and startup cowboys; we owe you a return visit.

With our 3 Google Developer Days in Munich, Moscow and Prague last month, we wrapped up “GDD season” this year. It was great to meet many of you in person, and we’re happy to see all of the positive responses via your tweets and blog posts. Participating in the events was a great way to update you on where we are in our product development as well as to hear your feedback.

Here is a 3-minute highlights video and a short summary of each of our Google Developer Day events. For all photos and videos, see here.

Sep 28, Tokyo: Japan is the 2nd largest country for Android app uploads and App Engine usage, so we were happy to meet and thank the strong developer communities there. We hosted our largest Developer Day in Tokyo, with 1,500 developers in Tokyo and 200 developers at a satellite venue in Kyoto. Our developer sandbox had over 30 booths with 90 developers, from the Android-based Android robot to the Android Developers’ Club, which presented more than 100 Android applications by its members. See youtube.com/GoogleDevelopersJa for videos of all sessions.

Oct 29, Sao Paulo: Mario Queiroz, VP Product Management, opened the day for Brazil’s 4th Google Developer Day with the announcement that Jambool will now provide payments support for Orkut, and we announced that Brazil is our second largest country in number of Chrome users. As Voice Search and Navigation for Android launched just the day before, we demoed live during the keynote, including a daring and successful voice search query, “number of people who attended the Bon Jovi concert”. We hosted 1300 developers throughout the day to packed sessions. See keynote video, photos and presentation slides (linked from each session page).

Nov 9, Munich: For the first time, we organized Google Developer Day in partnership with the Technical University of Munich, who co-hosted their own sessions and ran an Innovation Sandbox throughout the day. 1200 developers were in attendance, and we met with one of our most active GTUG communities, with 11 locations in Germany and 21 events in the last six months. We treated ourselves to beer & pretzels and watched the Blinkendroid team put together 72 Android devices, the highest number yet. See our highlights video and photos.

Nov 12, Moscow: This year we reduced the number of simultaneous tracks from 6 to 4 to help developers choose between sessions. After a great keynote, 1300+ developers from over 85 cities attended 24 different sessions, 2 project showcase sessions, and participated in countless discussions, including one with a Duma member and Skolkovo advisor. The local GTUG also hosted two hackathons – one focused on Android & Chrome/HTML5, and one focused on Google Maps. Here are the highlights video, photos and PDFs (linked from each session page).

Nov 16, Prague: Bringing almost 1000 Czech & Slovak developers together, the third GDD in Prague was the biggest yet. We loved how much local stuff was happening there! The local Google User Group hosted a mini-barcamp onsite and launched an internet TV station (gug.tv) during the event, developers competed in a QR hunting game, and much more. Almost every link regarding the event (including the YouTube playlist) was compiled by the community into this freely editable Google Doc.

While we have great fun at these events, and love interacting with local developers, we’re usually only in town once or twice a year. However, there are vibrant developer communities all over the globe that meet regularly to discuss and hack on all the technologies showcased at Developer Day. To get involved, find a local group near you, or start up your own!

Finally, based on the interest we saw from previous developer events, we created some digital “souvenirs” for you in the form of PC & Mac wallpapers and an Android live wallpaper.