Data from the Lunar Reconnaissance Orbiter’s Lunar Orbiter Laser Altimeter (LOLA) is leading to “the most precise and complete map to date of the moon’s complex, heavily cratered landscape,” NASA said last week.

The new LOLA maps are more accurate and sample more places on the lunar surface than any available before. “The positional errors of image mosaics of the lunar far side, where direct spacecraft tracking – the most accurate — is unavailable, have been one to ten kilometers (about 0.62 to 6.2 miles),” said [Dr. Gregory] Neumann. “We’re beating these down to the level of 30 meters (almost 100 feet) or less spatially and one meter (almost 3.3 feet) vertically. At the poles, where illumination rarely provides more than a glimpse of the topography below the crater peaks, we found systematic horizontal errors of hundreds of meters (hundreds of yards) as well.” In terms of coverage, the nearly three billion range measurements so far by LRO compare to about eight million to nine million each from three recent international lunar missions, according to Neumann. “They were limited to a mile or so between individual data points, whereas our measurements are spaced about 57 meters (about 187 feet) apart in five adjacent tracks separated by about 15 meters (almost 50 feet).” 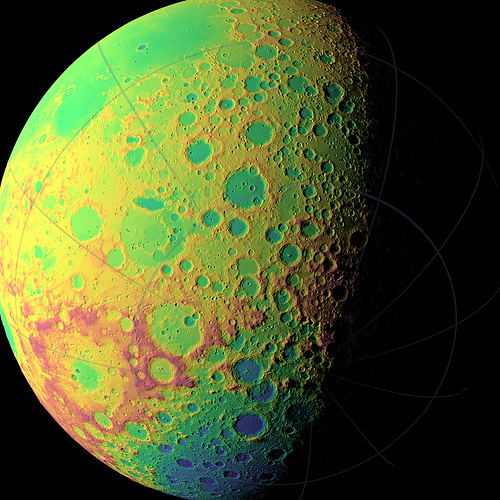 Which is NASA-speak for “LOLA pwns Kaguya,” I guess. More here, including nice hemispheral views of the topographic maps.