As you probably know, when you’re looking at an area on Google Earth, the date the imagery was captured appears in the lower-left corner, as shown here: 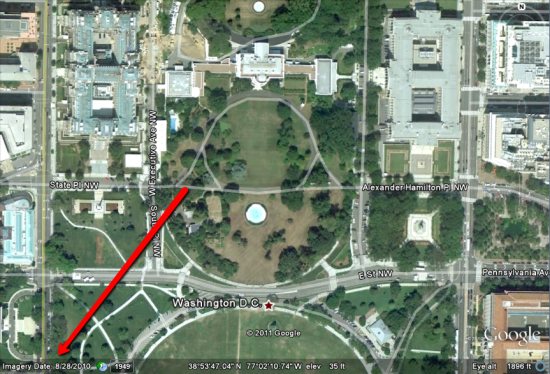 However, what does that date actually mean? As some of you have pointed out, the date doesn’t always correspond with the imagery (snow on the ground in July, etc).

For standard satellite images, it’s simply the date the imagery was taken, which makes sense. Easy enough. The discrepancies arise when Google loads imagery for a large area from a commercial aerial provider. In those cases, they’re given a range of dates for the imagery. The date you see on the screen is the “oldest known date” for that imagery, while the tic mark in the Historical Imagery sliders is the “newest known date”. In many cases, those date ranges can be up to a few months apart.

To confuse it further, some providers don’t even have exact dates for a batch of imagery; they might simply say “April-June, 2010”. In those cases, Google considers that to be “April 1 – June 30, 2010”, and then displays the date as explained in the previous paragraph.

While the system obviously isn’t perfect, it’s certainly improving. Google Earth didn’t start showing the date in the corner until version 5 came out (so you had less of an idea of when the imagery was captured), and the Historical Imagery tool was certainly a great addition to Google Earth.

As the pace and quantity of imagery updates continue to increase, I expect we’ll see some refinements to this system over the coming years to help it become even more accurate and useful.