Today we’re premiering our new Real-World Sightings series on Google Earth and Google Maps. As part of this experiment, we’ve added 10 images to the map based on stories we’ve heard from our users. As is common with betas, we’ll evaluate interest and engagement with this feature before determining future rollout plans.

It all started with a recent visit to my friend Nessie in Boston. As I crossed the bridge into town, the car in front of me stopped short so I slammed on the brakes. The cars next to me were also stopped, so I got out to see what was causing the back up.

There was a huge, red lobster sitting on the bridge. 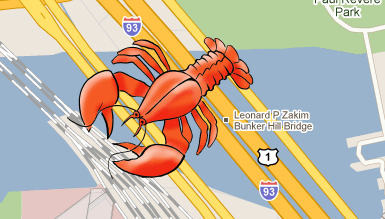 He wasn’t scared or hostile. In fact, he seemed quite amused as a few brave drivers navigated around his over-sized legs to successfully cross the bridge. Soon everyone’s fear and alarm gave way to wonder and surprise.

As I made the journey under the giant crustacean’s torso, I was reminded how much bigger the world is than we often realize. I made it to Nessie’s place in Boston safely and got to thinking: the world must be full of magical stories like this.

My friends at Google agreed, and so we asked users from around the world to share stories of the strange and delightful things they’ve seen. We were surprised at how many reports we received, so today we’re adding a new feature to Google Maps and Earth: Real-World Sightings. People have witnessed fantastical creatures in every corner of the globe, and in our effort to mirror the real world as completely as possible, we have decided to start including these eyewitness reports on the map.

So if you happen to run into a dragon or alien today in Google Earth (make sure you have 3D Buildings turned on) or Maps, don’t be alarmed. Instead, we encourage you take a few minutes to look for other creatures that have been reported in places all across the world. We’ll tweet some tips to help you get started finding these images on our Twitter handle @GoogleMaps, so follow along throughout the day to spot some fun things you may have thought only existed in legends and fairy tales!