The experience is best described in the following write up, by David Gedye, Principal Program Manager for Bing Mobile’s Augmented Reality Team:

In a keynote today at the Where 2.0 conference,  Blaise Agüera y Arcas, Chief Architect of Bing Mobile, shared Bing’s plans for the “Read/Write World.”
The Read/Write World is a project to index, unify, and connect of the world’s geo-linked media. Consisting of a cloud-based geo-indexing, matching and processing services, the scenarios it will enable include: 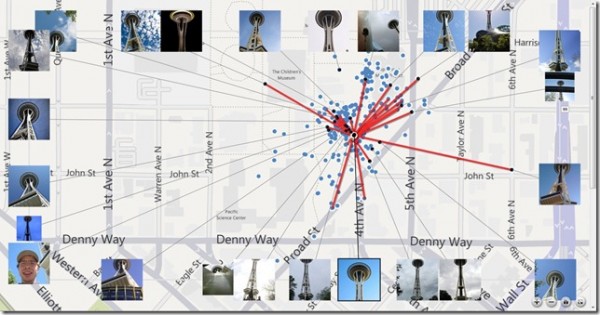 Microsoft will provide open source viewing code and cloud-based services to power the Read/Write World, and will make available its beautiful map imagery and more than 50,000 “synths” and panoramas that have been publically shared to the Photosynth Web site. 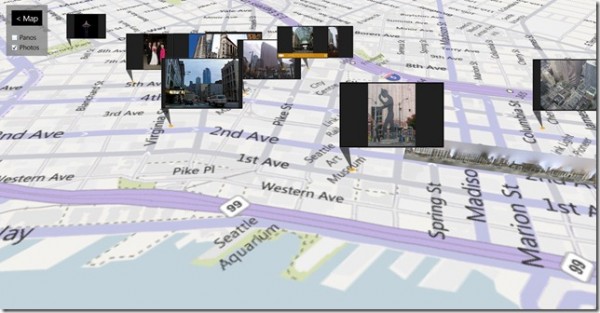 Read / Write World interlaces Bing Maps, Photosynths, and the new Reality Markup Language-tagged images to be associated with their respectively places in the world.

We are also proud to announce that the incredible 360 Cities panoramas – the world’s largest and fastest-growing collection of immersive panoramic imagery — are going to be indexed by the Read/Write World, with many available for Creative Commons reuse, under the control of the original photographers.
The more than 90,000 professionally shot panoramas of the world’s landmarks, natural wonders, historic buildings, and places of interest will join forces with the incredible imagery assets of Bing Maps and the Microsoft Photosynth community to create a rich trellis for the Read/Write World.

“Bing is a great partner for 360 Cities” said Jeffrey Martin, founder of 360 Cities. “Bing has created beautiful visual experiences on the web, and shares our passion for high quality imagery. Our network of photographers is very excited to be working with Bing to bring their amazing work to such a wide audience.”
“The 360 Cities panoramic photography is just gorgeous,” said Blaise Agüera y Arcas, architect of the Read/Write World. “It’s exciting to see this community’s beautiful imagery linked into an ecosystem where it’ll be able to connect to and augment the growing corpus of geo-linked media we’re indexing at Bing.”
The Read/Write World is in development at http://readwriteworld.cloudapp.net. You can read more about it there, see videos, and experiment with some of the early code.
Oops, did we just change the world again? I think so! More to come on how developers can engage with Read / Write World and Reality Markup Language (RML) in the coming months, but what you can expect is a schema-less data format, very flexible, where we only need to know several common things like location and author. A platform that is highly user-extensible in JSON-type and XML syntax.