With the 10 year anniversary of the World Trade Center attacks coming up in a few days, we thought we’d look at some ways to use Google Earth to remember those lost in the attacks along with ways to look toward the future.

While Google Earth wasn’t released until nearly four years after the towers fell, a handful of models were built to show the towers as they stood prior to 9/11/01. By loading this KML file

, you can see all of the towers that made up the original set of buildings, including the famous WTC 1 and WTC 2 buildings. 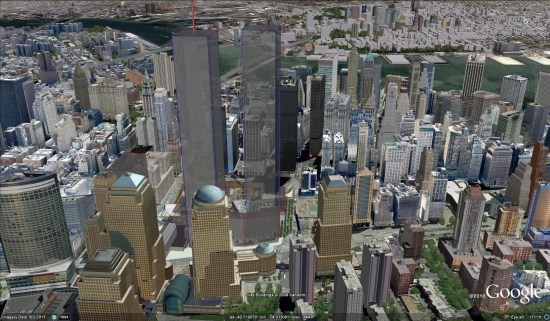 You’ll notice that some of the new WTC buildings, still under construction, are already visible in Google Earth. For the purposes of showing the area in a pre-9/11 state, you can right-click those buildings and Hide them. They’ll automatically re-appear next time you start Google Earth.

A more realistic-looking model was created by Patrick Griffin and can be found in the Google 3D Warehouse. His model, seen below, can be viewed by downloading this KML file.

You can also use Google Earth’s Historical Imagery to view images of the twin towers by going back to 1997. The imagery isn’t in color and isn’t very sharp, but clearly shows the towers. You can also view imagery from 9/11/01, and see the smoke and dust as it floats out across the water. 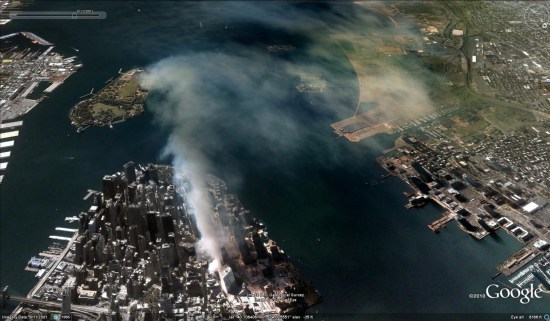 There are also a variety of models that somewhat show how the attack unfolded, but none were particularly compelling. If you search the 3D Warehouse for something like “world trade center attack” you can find a few.