Back in May, Google Earth for Android was updated with 3D building support on tablets. Despite the additional load of the 3D buildings, the software continued to run remarkably smoothly and continues to be an amazing way to view Google Earth. 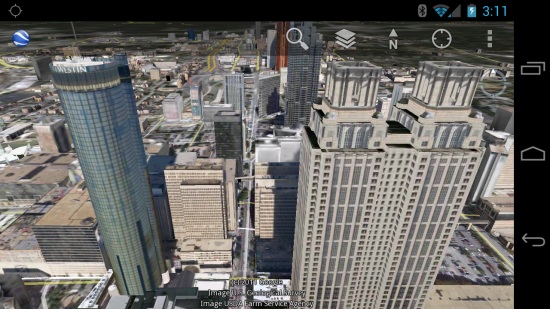 There was no update to Google Earth recently, and the buildings still aren’t available on my old phone (a Motorola Droid X), so presumably Google Earth looks at the hardware on your phone before presenting you with that option. If so, that seems like a wise move. Here is what the options panel looks like on the Galaxy Nexus:

I don’t know what the minimal specs are offhand, but a dual-core processor seems like a good place to start. The Google Earth page in the Android market simply says “select phones”, so I don’t have a full list of compatible phones yet. As another added bonus, Google Earth came preinstalled on the phone; I’m quite sure that was not the case on the Droid X.

With the large, stunningly high screen resolution on the Galaxy Nexus (1280×720), Google Earth looks simply brilliant. More phones of this quality and beyond will be coming in 2012, which will make the mobile Google Earth experience even better.