The Bureau of the Census reports that the 2010 Census represented “the most massive participation movement ever witnessed in our country” with some 74 percent of the households returning their census forms; the remaining were counted by census workers.  Now you can have free access to this valuable national resource with Tetrad’s Sitewise App, PCensus Online or PCensus Desktop.

In any of these platforms you can retrieve information on sex, age, race Hispanic or Latino, household relationship and group quarters.  Housing items include occupancy status, vacancy status and tenure (owner occupied or renter occupied).

With the Sitewise App on your iPhone/iPad, Android device, you can retrieve 2010 census data for a circle or drive-time area where you are located (or for a street address or a place name).  Then review and email a 20 page report and map to understand the demographics of that location.  PCensus Online gives the user the added capability to trace out a polygon or neighborhood area and compare the demographics for many areas.  This lets you select the best location for a new outlet or sale territory.  Use PCensus Online free with the 2010 Census.

This PCensus trio of products with the 2010 census offers you an edge for location analysis and finding new markets.

Moving your data to the (public) cloud necessarily involves relinquishing some control over the setup and maintenance of the environment in which your data is hosted. Cloud-based hosting services such as Microsoft Azure are effectively just scalable shared hosting providers. Since parts of the server configuration are shared with other customers and (to make the service scalable) there is to be a standard template on which all instances are based, there are many system settings that your cloud provider won’t allow you to change on an individual basis.

For me, this is generally great. I’m not a DBA or SysAdmin and I have no interest in maintaining an OS, tweaking server configuration settings, installing updates, or patching hotfixes. The thought of delegating the tasks to ensure my server remains finely-oiled and up-to-date to Microsoft is very appealing.

However, this also has its own down-sides. One advantage of maintaining my own server is that, even though it might not be up-to-date or have the latest service packs applied, I know nobody else has tweaked it either. That means that, unless I’ve accidentally cocked something else up or sneezed on the delete key or something, a database-driven application that connects to my own hosted database should stay working day after day. When an upgrade is available I can choose when to apply it, and test to ensure that my applications work correctly following the upgrade according to my own plan.

Not so with SQL Azure.

Two examples of breaking changes I’ve recently experienced with SQL Azure, both seemingly as a result of changes rolled out since the July Service Release:

Firstly, if you use SQL Server Management Studio to connect and manage your SQL Azure databases, you need to upgrade SSMS to at least version 10.50.1777.0 in order to connect to an upgraded SQL Azure datacentre. This same change also broke any applications that rely on SQL Server Management Objects (including, for example, the SQL Azure Migration Wizard, resulting in the error described here). The solution to both these issues is thankfully relatively simple once diagnosed – run Windows Update and install the optional SQL Server 2008 SP1 service pack.

A more subtle change is that the behaviour of the actual SQL Azure database engine has changed, making it more comparable to Denali on-site SQL Server rather than SQL Server 2008 R2. Whereas, normally, upgrading SQL Server wouldn’t be a breaking change for most code (unless, of course, you were relying on a deprecated feature that was removed), the increase in spatial precision from 27bits to 48bits in SQL Denali means that you actually get different results from the same spatial query. Consider the following simple query:

Not much of a difference, you might think… but think about what this means for any spatial queries that rely on exact comparison between points. How about this example using the same two geometry instances:

So, a precautionary tale: although SQL Azure hosting might have handed over the responsibility for actually performing any DB upgrades to Microsoft, the task of testing and ensuring that your code is up-to-date and doesn’t break from version to version is perhaps greater than ever, since there is no way to roll back or delay the upgrade to your little slice of the cloud.

The default font family used for rendering text labels on maps created by Mapnik (and the one shipped with it) is Deja Vu. Deja Vu Sans Book is a pretty nice font, and can be seen, for example, in all the labels used on Open Street Map: 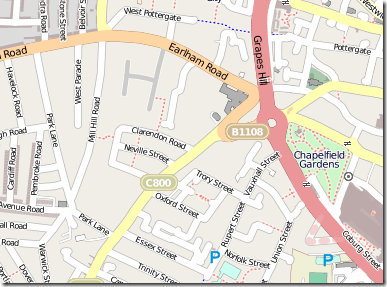 So what if you want to render text onto a custom tile overlay using a different font?

To do so, first you need to register the location of the directory containing the fonts you want to use. For example, to make all the installed Windows fonts available to Mapnik, add the following to the top of your python render script:

Mapnik needs to reference these fonts by their font name (not by filename, for example); To find out the correct name to use for each font, once you’ve registered your custom fonts directory you can call the following:

On a fairly vanilla installation of Window 7, this gave me a list of available fonts as follows:

To use one of these fonts, set the TextSymbolizer face_name attribute in the style applied to your layer to the name of whatever font you want.

and this is the map it creates: 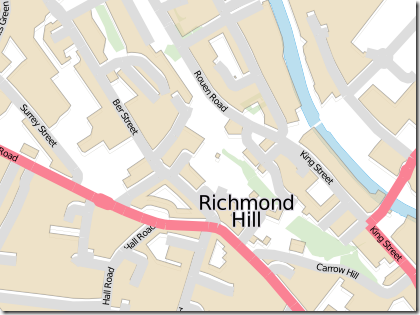 And here’s the same map rendered with, oh I don’t know, say Comic Sans MS Regular style (don’t ever, ever do this! Maybe unless you’re creating a map of how to get to a children’s party…)

which leads to this: 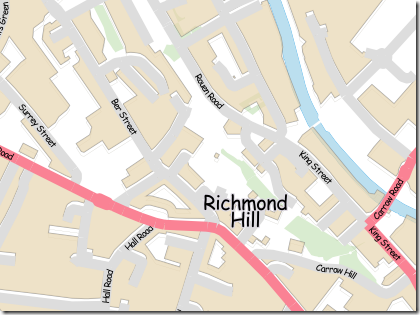