For this final post, I’m going to wrap everything I’ve done so far into a reusable module.

The most recent update to the Bing Maps AJAX control, introduced in early May 2011, became slightly notorious as the “ninja” update. The reason being that, silent but deadly, the unannounced update accidentally broke many websites with no warning. Unfortunately, these breaking changes rather eclipsed some of the other nice new features introduced in the update – one of which was the introduction of a common framework through which Bing Maps could be extended by creating custom modules.

Now that the bugs introduced in the latest update have mostly been ironed out, I thought it time to investigate the new module functionality. It’s pretty easy to move your custom code into a module – the main requirement is that, at the end of your function, you place a call to the Microsoft.Maps.moduleLoaded() method. This lets Bing Maps know that your module had been loaded and ready to use.

So, I added the moduleLoaded() call, rolled my animatedTileLayer function into a file and uploaded it to http://www.a3uk.com/bm_modules/animatedtilelayer.js. Note that custom modules registered via the Bing Maps registerModule() method must be placed on a publicly-accessible website – you can’t register a custom module on a local URL. So, when you’re developing a module locally, I recommend that you get it working properly first using a regular embedded script, and then wrap it in a module at the last minute.

To use my new module, I registered and loaded it as follows:

The animationModuleLoaded callback would be fired after the module had loaded, and was responsible for creating a new instance of the animatedTileLayer class and adding it to the map, as follows:

(The options passed to the AnimatedTileLayer constructor are explained in my previous posts). I also added a couple of basic HTML buttons to the page that would control starting, stopping, and resetting the animation, and a text input box that would display the timestamp of the currently displayed frame:

The current frame counter would be updated by the function specified in the frameChangeCallback:

Put it all together and what have you got?

So that’s it – my animatedtilelayer class wrapped into a custom module, registered and loaded from a page that creates a new animated tile layer and calls into a couple of the methods provided by the class.

You can play with (version 1.0) of the final product at http://www.a3uk.com/demos/animatedtilelayer/: 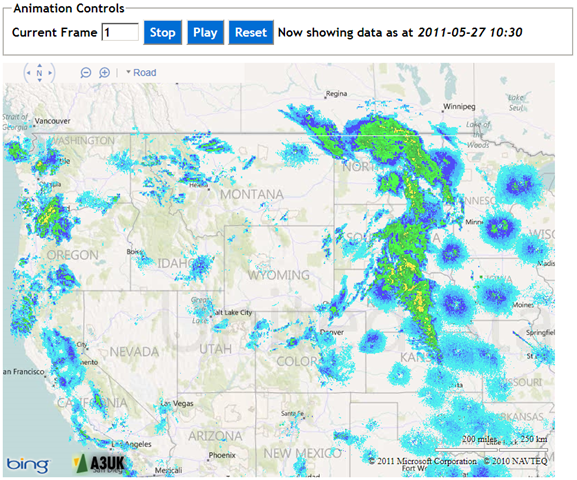 There’s still a few bugs that I’m aware of that, at some point, I might try to fix:

Capturing a GPS track is easy — just make sure that you have a GPS tracking device on hand before you hit the slopes. A Garmin® or Magellan® device works best, but you can also use a GPS tracking application on most mobile phones. My Tracks on Android works well, or if you have an iPhone, try using MotionX-GPS.

When you get to the top of the mountain, start recording your track. Place your phone or device in an outside pocket, preferably separate from another device. When you get to the end of your run, stop the track. Or, if you prefer to track the entire day, keep the GPS track running. Most of us decided to keep our tracks running the entire day so we could focus entirely at the task at hand – skiing.

After a full day of skiing and snowboarding, we grabbed some hot cocoa from the lodge and headed home, where we imported our tracks into Google Earth. My fellow Googler, David captured his GPS data with My Tracks, and imported the data by dragging and dropping a .gpx file into Google Earth. We then started playing with the new GPS track animation feature launched in Google Earth 5.2, and customized and animated our ski tracks just the way we wanted them. Take a look below at how David customized the line color and label of his track. (He even personalized the tracking icon to make it look like an actual skier!)

We also animated our tracks by creating a tour, which we customized by changing the camera tilt angle, camera range, and tour speed in the preferences dialog. Here’s a helpful hint: if you want it to seem like you went faster, create a tour with a high speed setting to view your track in fast-forward.

Don’t ski or snowboard? Don’t worry! You can track other exciting winter activities in Google Earth. I’ve never been a big skier, but I love to snowshoe and go dog sledding. Check out the dog sledding tour I created below, paired with a photo of my actual dog sledding experience.

We had so much fun tracking our winter adventures in Tahoe that we even tracked our bus ride home to San Francisco. We were sorry to leave, but I knew we’d be back to trace new paths in the mountains next year — or even next weekend!