Speaking of Personal Manufacturing, our fast-moving friends over at i.materialise have devised a new 3D printing competition for SketchUp modelers everywhere. The Google SketchUp and i.materialise Pimp Your Vehicle Challenge invites you to design an add-on, attachment or other accoutrement that would improve the transportation mechanism of your choice. Cars, bikes, motorcycles, pogo sticks—designs that would upgrade any mode of transit are all fair game. As an example of one such real-world object, consider the doohickey pictured below: It lets you attach a GPS device to the handlebars of your bicycle. 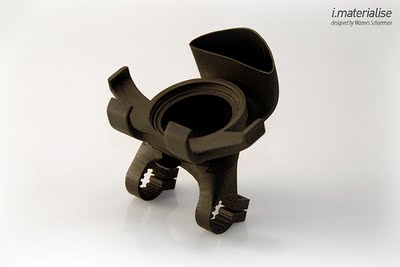 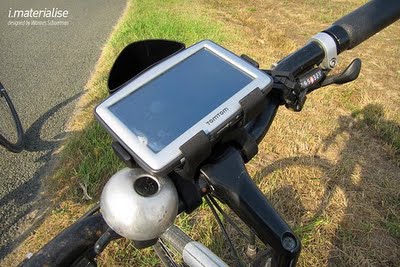 Judges from i.materialise and the SketchUp team will pick first, second and third-place winners. First prize gets his or her design 3D printed on a Zcorp multicolor printer and a SketchUp Pro 8 license. Perhaps even more interestingly, the engineers and product development people at i.materialise will work with the first-place winner to try to make the winning design a commercial reality.

In this post I’m going to look at how OSM data compares in terms of quality, and what better benchmark to test it against than the Ordnance Survey (OS) – the historical and much-revered national executive mapping agency of Great Britain.

A UK company called ITO has produced a very useful OSM Analysis tool, that displays details of roads that are listed in the Ordnance Survey’s OS Locator dataset that are not present in the OSM dataset. The tool is provided as a service for OSM mappers, with the assumption being that the OS dataset is both complete and accurate, and therefore roads listed on the site are “missing” from the OSM dataset and need to be found and added.

Looking at the analysis for Norwich, there are a total of 38 roads (out of 1,619) of the OS Locator dataset for Norwich that are not present in the OSM dataset. This works out at a 97.65% match between OSM and OS, and ranks Norwich as 41st in terms of OSM completeness out of the listed UK areas. Being both a competitive person and proud of Norwich as my (adopted) home, I thought I’d set about tracking down those missing 38 roads and making the OSM map of Norwich 100% complete to the Ordnance Survey dataset.

But hang on, I thought that this post was about quality, not completeness? And there is the interesting thing…. it turns out that the “missing” roads are not due to incomplete data, but rather discrepancies in data quality. To explain, the list of roads currently shown on the OS Locator dataset but not on OSM is as follows:

The first thing to note is that 7 of the errors are listed by the OSM Analysis tool itself as “minor” errors. In every case, the discrepancy is in the use of apostrophes in the road name. I’m not about to get into an argument on the use of English language as to which one is correct – but as far as I’m concerned if the only difference between the two datasets is in the use of an apostrophe, I’m happy to mark that down as not being relevant in terms of spatial data completeness/accuracy.

I was surprised to see some of the roads listed as apparently missing: Queen’s Road, for example, is a major part of the Norwich inner ring road – how could that be missing from OSM? The answer can be found by examining the map that shows where the “absent” Ordnance Survey record is supposed to lie: 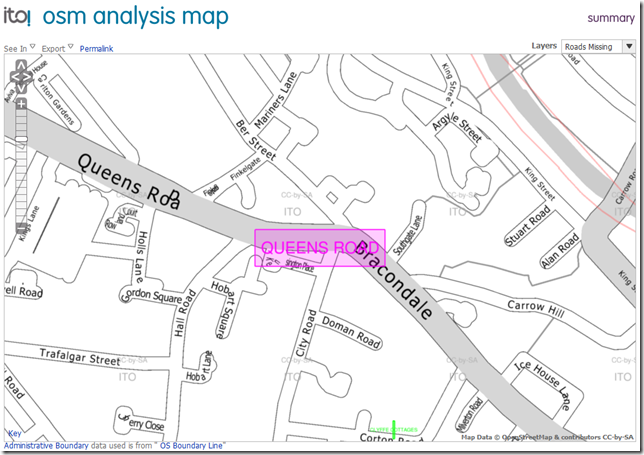 Queen’s Road becomes Bracondale at a fairly non-descript location – it’s not a major intersection, it’s more of just a bend in the road. The OS Locator dataset contains one section of road that’s labelled “Queen’s Road”, which, in the OSM dataset, has been labelled “Bracondale” – essentially it’s just a discrepancy between exactly where the road changes name. Again, I’m happy to ignore that one.

Another road on the list that lies not far from me is “Birkbeck Road”. Or, at least, that’s what I thought it was called, and that’s what it’s called in OSM. But the OS dataset seems to think it’s called “Birbeck Road”. Could it be that I’ve been wrong? I went to check Google Maps: 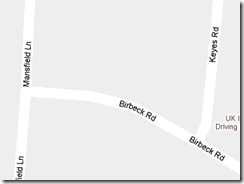 Google Maps reckons it’s called “Birbeck Road”, so maybe the Ordnance Survey is right, and OSM is wrong. To double check, I went to Bing Maps: 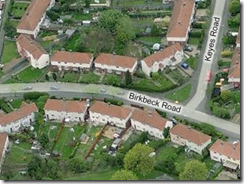 Huh? So that’s two votes for “Birbeck”, and two for “Birkbeck”. I better carry on looking…

www.yell.com goes with “Birkbeck”, so that’s 3-2 to the OSM spelling. 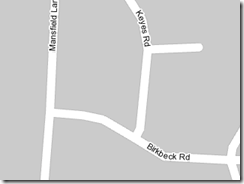 But www.viamichelin.co.uk agrees with the Ordnance Survey. 3 all. 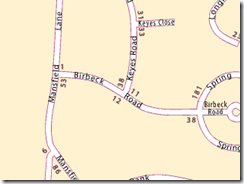 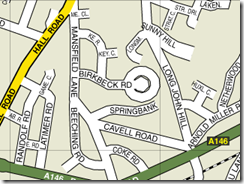 ….until you zoom in, at which point it changes its mind and agrees with the Ordnance Survey! 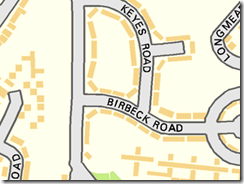 And this is where Open Street Map really excels – it’s collaboratively created by people on the ground with local knowledge, and with the aid of my bicycle and a camera, I could demonstrate the ethos of Open Street Map and settle this dispute once and for all. So, I now proudly present…. 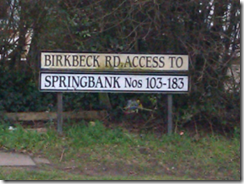 …Birkbeck Road. So it turns out that Open Street Maps is correct, and the Ordnance Survey is wrong (as are Google Maps, Via Michelin, and StreetMap.co.uk). Enthused by this, and still on my bike, I decided to check some of the other apparently missing roads. The following photograph explains the apparent missing EDWARD JORDELL PLAIN, which once again, OSM correctly has listed as Edward Jodrell plain. 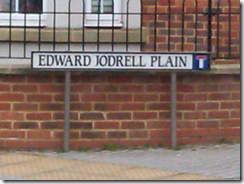 Interestingly, once again Google Maps agrees with the Ordnance Survey, and gets it wrong. 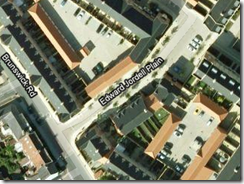 Whereas Bing Maps agrees with Open Street Maps and gets the correct spelling: 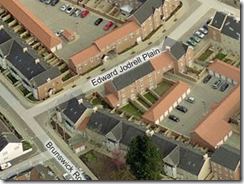 Over the next week or so I’m hoping to work my way through the rest of the list, but I continue to be amazed by the data available through Open Street Maps. Not only does it contain more data than Bing or Google (in that it contains points of interest such as postboxes, bus stops, property boundaries, and any number of other amenities), but in many cases it has higher quality data than the Ordnance Survey, at least in terms of the very limited sample I’ve looked at here. In fact, whereas I originally set out to update Open Street Maps to match the data from the Ordnance Survey, I’m beginning to think that the folks at the Ordnance Survey ought to be looking at the OSM data very closely and checking their data against it. And did I mention that OSM is free…?