I would like to share with you some insights about innovation and motivation. However, rather than writing up an essay on this topic I opted for a more leisurely approach: using video presentations from YouTube. A short introduction first.

You might have come across stories where people “just had an enlightening moment” and invented something extraordinary and became “overnight success”. But the reality is that great inventions are never borne overnight. Steve Johnson, the author of “Where good ideas come from”, explains it in more detail, and in a very entertaining way, in the first video presentation. If you still struggle to come up with that “one big idea” that will move things forward for you, don’t despair! There is hope for all of us “slow thinkers” after all! 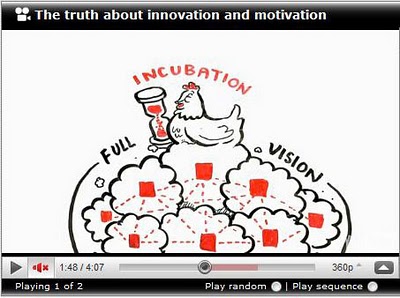 The second video, equally entertaining, is about motivation – or rather the secrets of creating an environment that allow the innovation to flourish, increasing the chances of coming up with that elusive “big idea”. Fifteen minutes required to view both video presentations can be a great investment in your future. Enjoy!

Google finally has its day of triumph in smartphones market. The latest set of figures on purchases of smartphones released by Nielsen indicate that 2010 is the year of Android OS. It is quite an interning find given that wherever you look, everyone seems to be using iPhone! But the reality is that the share of current sales of smartphones running on Android OS is 50% higher than that of iPhones! The following graph clearly illustrates the trend. 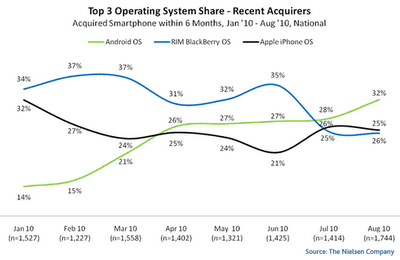 True, iPhone still commands the largest overall share of the market but Android based phones are gaining rapidly in popularity. It’s the battle of “one versus many” – the following graph highlights the trend – relatively stable share of the market held by iPhone but rapidly growing share of Android OS. It indicates to me that all those who meant to buy iPhone have already done so. So, there is not much potential for Apple to find many more new buyers for its phones! The only way for them to make money now is to release new models with increased frequency – to maintain sales revenue by selling “must have” upgrades to existing group of very loyal users. Although it appears that Android OS expansion comes at some expense of BlackBerry, the bulk of new users are most likely those switching from older mobile phone technologies to the latest generation of smartphones. If current trends continue, Android OS based smartphones will soon dominate the market. 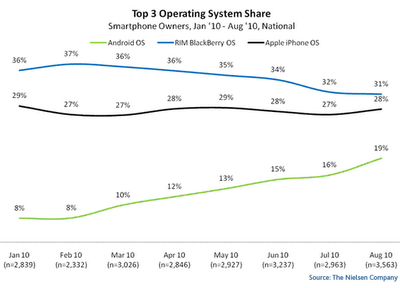 “Social networking” phenomenon is driving astronomical growth of many online companies, from the leaders of the pack like Facebook, to numerous peddlers of “make quick money online” self-help guides. The bigger the network/ mailing list, the larger the company value and profits. But what is really behind this phenomenon? I am leaning towards a conclusion that it has nothing to do with “social” but rather with our limitation to deal with information overload…

Let’s look at this objectively. The capacity for individuals to participate in various social exchange networks was available from the early days of the Internet: forums, discussion boards, chat services and the like. However, the limitation was that these were mostly thematic based networks. With rapid growth of themed content on the Internet it all became very fragmented and difficult to follow…What Facebook, Twitter and the like brought to the mix was the capacity to participate/ follow many themes from a single portal! So, rather than helping user engage in “social networks” what those companies are really doing is assisting in information exchange! As simple as that. Just think about it. A person “following” a company on Facebook or Twitter has nothing to do with “social interaction” with that company – it’s not about “belonging” or “association” / “being part of a social group”. It’s all about access to specific information of interest to that individual (humour or other forms of entertainment, news, events, specials, etc.)!

Same applies to relationships between individuals – sociologists claim normal individuals are not capable of true social relationship with more than 150 counterparts at a time. Yet social network sites are full of people with thousands of contacts… Again, it is all about information and trusted channels of access to information, not about social interaction! The fact that individuals can participate in discussions and exchange messages is a part of the deal – some take advantage of it, others do not. True, the focus on “friends” helped Facebook to grow those personal networks at a rapid rate to propel the company to number 1 network facilitator but I will argue the key driving force was “the need to know” and not “the need to belong” (opening up the network to others and not only college students was the best and most logical decision to make since it is not about who you are but rather what you need to know!).

The information overload is what in my opinion is driving the popularity of the thing labelled as “social networking”. People want to know what is happening in their immediate environment, places of interest, topics of interest AND people they associate with (friends, colleagues, celebrities, etc.). At the same time people want to participate in some of those forums personally. Not enough time to read/see/do everything so the only way to keep up is to revert to “skimming over main headings” and to “following” limited number of information themes (on demand, user initiated).

What is helping in managing communication complexity associated with information overload is wide acceptance of abbreviated message format. It could be argued that the format was first introduced by Google Search – we all are so used to it: title and a short description of content. Just compare the main content pages of Facebook, Twitter, LinkedIn or Google Search … they all follow the same “short message format”!

I believe “social network” is a bit of misnomer as it implies only personal interactions of a casual nature. It is more than that! And the implications of this view on the state of affairs are far reaching. Let me just share a few observations. Firstly, for publishers and participants in networked information exchange it highlights the importance of catchy titling with informative but short secondary tag line to draw attention of “skimmers” (the principle is nothing new and has been applied in print advertising for ages…). Short form content sharing and aggregation will only grow in popularity. This is a great opportunity for content aggregators and gadget makers and another warning for those considering locking their content exclusively behind pay walls (although can also be seen as a great opportunity if enough of short content is left in the public arena!).

Secondly, it implies that the importance of Google and other search engines (and hence SEO for marketing) will be diminishing as “search” is starting to loose ground to “personal recommendations”. A new information referral model is emerging on the Internet where “opinion leaders” (ie. those with large personal networks) are starting to play more significant role in directing online traffic. The bad news for online advertisers and marketers is that it is a very fragmented channel of communication. It also means that the concentration of online advertising power will be shifting to network facilitators, such as Facebook, and away from search focused sites. Some food for thought…