We’ve talked a bit about Google’s Fusion Tables product before — a great way to turn a table full of data (such as an Excel spreadsheet) into a fully functional map!

The maps can easily be shared through a Google Maps interface or even in Google Earth, but the mobile support for Fusion Table projects has been pretty weak. That’s where the folks from Build-A-Map have stepped in, with a new product called My Fusion Tables. 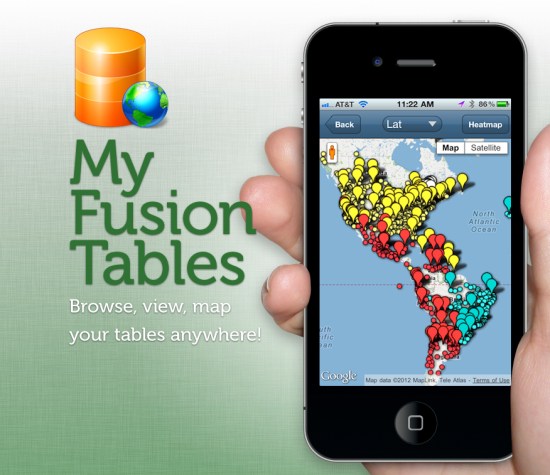 My Fusion Tables a mobile application that allows you to browse, view, and map data from Google Fusion Tables on both mobile phones and tablets. You can find it in the iOS App Store or on Google Play.

The ability to claim a business listing was first rolled out in March of 2005 with the launch of Dashboard precursor, the Google Local Business Center. These four data points allow for some interesting analysis of the “run rate” at which Google is creating a direct relationship with business locations worldwide.

Here is a chart showing the growth since inception (U.S. data is estimated).

Some thoughts about the graph:

While there may be some questions surrounding the specifics of the numbers, the direction and rates seem pretty clear. As Everett Dirkson is purported to have said: A million here, a million there, pretty soon it adds up to real money. That certainly seems to be the case here.

Google Maps (formerly Google Local) is a web mapping service application and technology provided by Google, free (for non-commercial use), that powers many map-based services, including the Google Maps website, Google Ride Finder, Google Transit, and maps embedded on third-party websites via the Google Maps API.