It’s been only two short weeks since Google I/O 2011! There was fantastic energy at the event, and developers had their choice of over 100+ sessions on topics ranging from Google Apps to Android to App Engine to HTML5 to Cloud Robotics.


Here are the highlights from the Google Apps track:

In the Google Apps track, we had 8 sessions on a variety of topics of interest to Google Apps Marketplace developers, systems integrators and customers alike. All of the sessions are available in HD on YouTube and we’ve also posted many of the session slides and notes.

We had 24 fantastic companies in our Developer Sandbox this year, showcasing the applications they built for the Google Apps Marketplace and the services they provide Google Apps customers as system integrators or VARs. We were excited to see many of the companies talking about new integrations they have recently built with Google Apps.

The official After Hours event celebrated technical and artistic innovation and included robots, games and transforming vehicles in addition to a live performance from Jane’s Addiction. Many Google teams and companies attending I/O also threw plenty of great parties at nearby bars and restaurants.

Along with an unintended tan from the Brisbane sun and a serious sense of awe at how large golden silk orb-weavers are, I came home from linux.conf.au (LCA) 2011 with a bunch of new ideas from the plethora of terrific talks at the conference. You can find videos of most of the talks on the conference wiki but I have to call out some of my favorites here.

First and foremost, Vint Cerf, Googler and co-designer of the TCP/IP protocols, gave a thoughtful and humorous keynote on where he thinks the internet is going, and what we need to do to get it there. Despite widely held concern around the rapidly decreasing number of available IP addresses, his deeply informed take on the situation was characteristically upbeat.

While Google has released more that 20 million lines of open source code through the years, we’re always trying to release more. My colleagues Dan Bentley and Daniel Nadasi gave an extremely useful talk about Make Open Easy (MOE), their program within Google to make the process for Googlers to open source code as fast and easy as possible, and how this methodology might be used by other businesses. They also talked about the challenges a project faces in trying to be useful to both the public and the internal teams that depend on it.

Last but far from least, I was wowed on Thursday by Paul Gardner-Stephen’s talk on “The Serval BatPhone: Making Mesh Mobile Telephony Practical, Anywhere, Any Time.” Especially in light of recent catastrophic weather events in Australia, the potential to free cellular phone communication from the constraints of significant and expensive infrastructure is hugely exciting.

This LCA, completely relocated because of extensive flooding 10 days before opening, was one for the record books. As always, LCA was stimulating, exhausting, warm, and a wonderfully well-organized meeting of over 700 curious minds.

Barry Schwartz highlighted this new tool this morning that automatically alerts a user via email when the satellite imagery for a given area has been updated. The tool is super simple to use and provides you with a dashboard to unsubscribe from previous requests.

It is also a super simple way to ascertain lat/log to 14 levels of accuracy. This is useful if you are creating a KML file or an hCard code for you website to signal to Google your businesses’ physical location. The tool can be found at FollowYourWorld.appspot.com. Here is a screen shot of the tool: 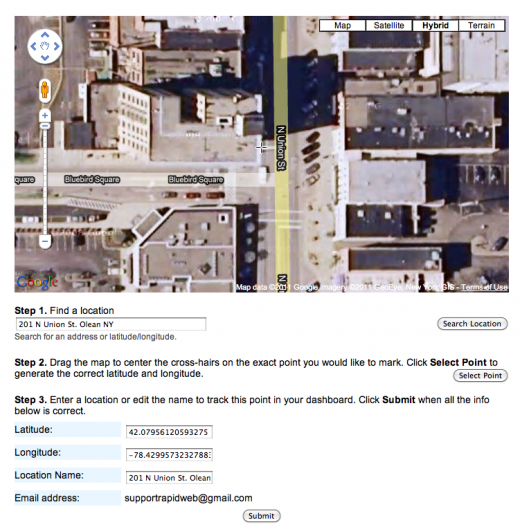