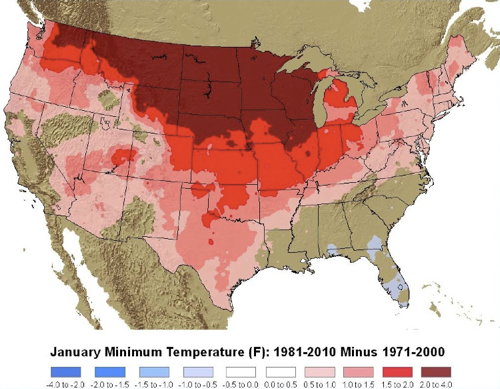 Whenever I see a weather forecast, it’s usually accompanied by normal temperatures for the day. In NOAA’s case, that normal is calculated from a 30-year average, updated every decade. NOAA just updated those norms, Dan Satterfield reports, and as you might expect, things are a bit warmer: “Climate change is expected to be stronger in northern areas of North America and that trend continues to show up. It is also expected to be more noticeable at night and in winter and that too shows up clearly,” Dan says. Here’s a PDF of the NOAA briefing deck explaining the update, from which the map above is taken: the map shows the increase in degrees Fahrenheit between the 1971-2000 and 1981-2010 normal minimum temperatures for January. Via MAPS-L.