[Cross-posted on the Google.org and Official Google Blog]

Climate change is too often misunderstood to be simply an environmental issue, rather than a human issue. For our children and grandchildren, climate change is an issue of public health, economics, global security and social equity. This human side of climate change is explained in a new Google Earth tour narrated by former U.N. Secretary General Kofi Annan. Within these stories, you’ll find data and tools to explore this topic in more depth, and meet some of the people who are actively working on managing the risks of climate variability and change. We encourage you to take the tour to learn more about these human issues and the inspiring work of groups like the Alliance for a Green Revolution in Africa (AGRA) that are helping farmers cope with climate change. We hope this video will serve as a useful tool as educators help students around the world understand the complexity of this issue.

This is the latest in our series of climate change tours that we’re releasing leading up to the global U.N. Framework Convention on Climate Change (COP16) talks in Cancun, Mexico this week.

As part of the Google Earth for Educators Community, we’ve also created a special Climate Change Educators Resources page that teachers can use in their classrooms. Here, teachers can find the tools they need to create lesson plans about climate change, including all the individual Google Earth KML layers available for download. Teachers and students can overlay multiple data layers that help illustrate climate change, and discuss and analyze them as part of K-12 and higher education curriculum. We’re also looking for lessons plans for any school grade that use this narrated tour or these Google Earth KML layers, so if you’re a teacher or instructor, please submit your lesson plan for review now. 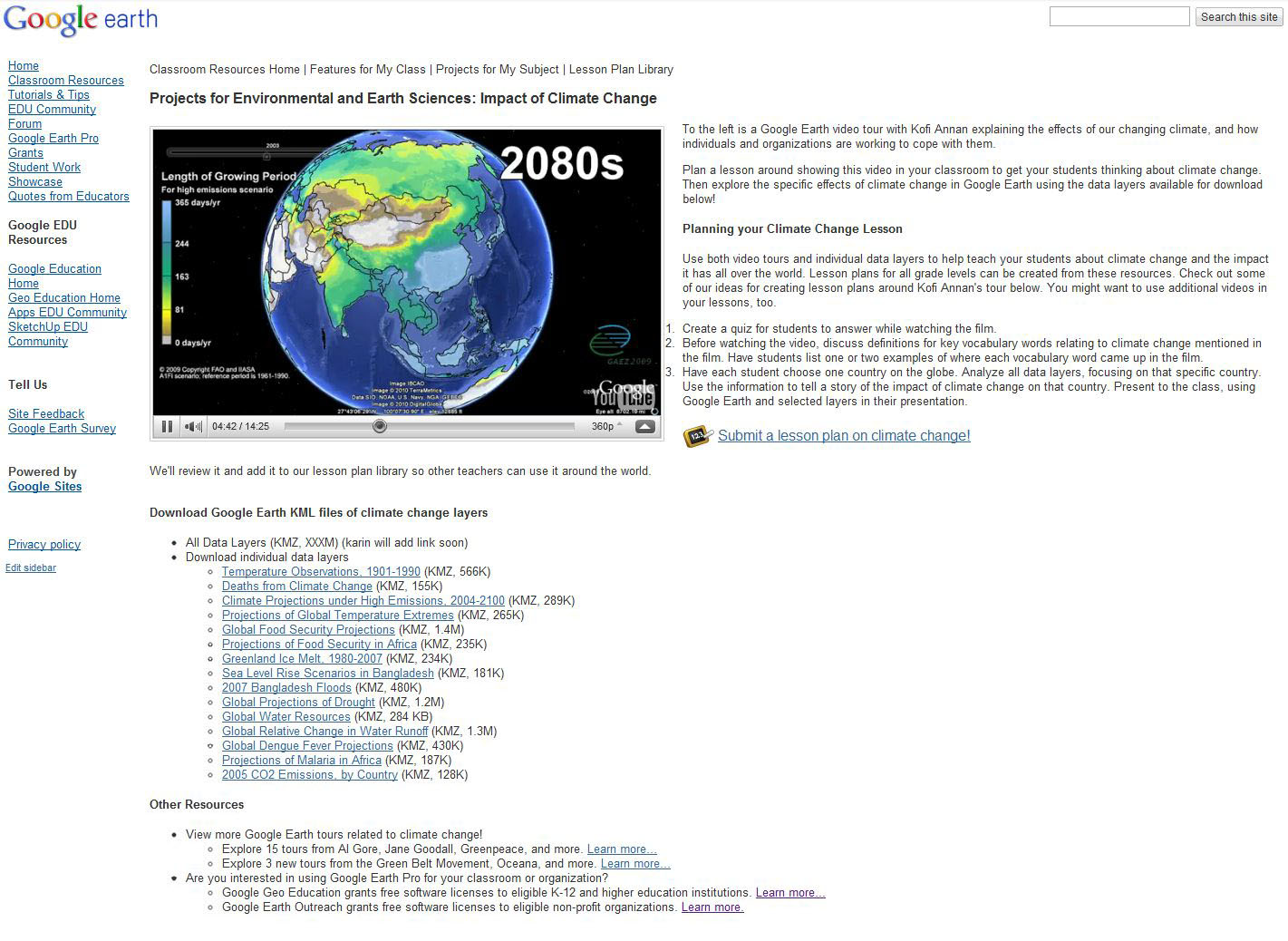 (Cross-posted on the Official Google Blog)
Occasionally, we invite distinguished guests to contribute to our blogs and we’re very happy to have Wangari Maathai share her perspective here. In collaboration with Wangari Maathai’s Green Belt Movement and several other partners, the Google Earth Outreach team has created several narrated tours on the topic of climate change in preparation for the UNFCCC’s COP16 Climate Summit 2010 in Cancun, Mexico. Fly underwater to learn about the effects of ocean acidification on sea life with Oceana. Zoom around Mexican mangroves in 3D and learn about the importance of this biodiverse habitat… and what must be done to protect it for future generations. Visit google.com/landing/cop16/climatetours.html to experience these tours. -Ed.

Ask most people what trees mean to them and the first thing that comes to mind is the tree outside their bedroom window or the forest where they played as a child. Trees do occupy a powerful place in our emotions, but the most powerful argument to protect our world’s trees is not based on sentiment. There is a vital interdependency between communities and the trees they rely on for survival. Trees are our watersheds, protectors of the natural environment, and sources of food. Remove the trees from the equation and the community feels the impact.

I came to this realization in the 1970s in Kenya. I was talking to women in my community about their problems: hunger, access to water, poverty, wood fuel. I saw a link between their needs and the condition of the land and thought, “Why not plant trees to address these issues?” Trees hold the soil to the ground so that we can grow food in it, they protect watersheds and facilitate harvesting of rain water, fruits trees supplement food and trees give us domestic energy and wood with which to build our shelters. So while still working at the University of Nairobi, I established a tree nursery in my backyard, planted seven trees at a public park and founded the Green Belt Movement. The organization works to empower communities, to build their capacity to restore Africa’s forests and put an end to the problems that deforestation and other forms of environmental degradation cause. As a result of this idea, more than 40 million trees have been planted to restore the environment and improve the lives of the people who are linked to the land.

When we were offered a unique opportunity to partner with the Google Earth Outreach team on a project using new Google Earth technology to visualize trees in 3D, we were thrilled. For accuracy and integrity we worked very closely with Google, advising them on the modeling of unique African trees like the broad-leaved Croton, the Nile tulip tree and the East African Cordia. These tree models illustrate the biodiversity in our tree planting sites, especially in the forests, and how we carefully select trees that are indigenous and sustainable to the natural surroundings. 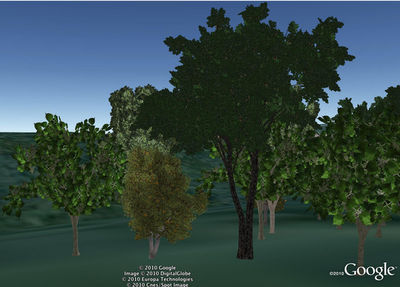 Broad-leaved Croton, the Nile tulip tree and the East African Cordia (from left to right)


We then used data from real planting locations to “plant” the tree models in Google Earth and create 3D visualizations. Now, for the first time in Google Earth, people from all over the world will be able to virtually visit these planting sites, explore the 3D trees and connect with the work that we are doing. 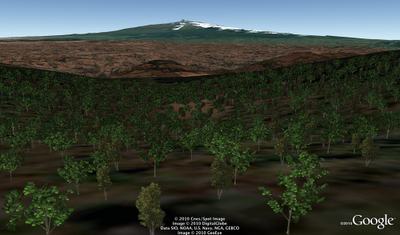 
Tree planting is a simple activity with tangible results, and anyone can participate. It helps people come together to address common problems and work collectively towards community improvement and sustainability. I hope that seeing our beautiful tree planting sites in 3D on Google Earth will be a source of inspiration for people to engage, plant trees and organize planting activities in their own communities. Taking charge of our lives and the environment around us can help ensure a lasting legacy and healthy future for our children.

Learn more about the Green Belt Movement and support our work at http://www.greenbeltmovement.org.

[Cross-posted from the Google.org blog]

Today, we launched a new Google Labs product called Google Earth Engine at the International Climate Change Conference in sunny Cancun, Mexico. Google Earth Engine is a new technology platform that puts an unprecedented amount of satellite imagery and data—current and historical—online for the first time. It enables global-scale monitoring and measurement of changes in the earth’s environment. The platform will enable scientists to use our extensive computing infrastructure—the Google “cloud”—to analyze this imagery. Last year, we demonstrated an early prototype. Since then, we have developed the platform, and are excited now to offer scientists around the world access to Earth Engine to implement their applications.

Why is this important? The images of our planet from space contain a wealth of information, ready to be extracted and applied to many societal challenges. Scientific analysis can transform these images from a mere set of pixels into useful information—such as the locations and extent of global forests, detecting how our forests are changing over time, directing resources for disaster response or water resource mapping.

The challenge has been to cope with the massive scale of satellite imagery archives, and the computational resources required for their analysis. As a result, many of these images have never been seen, much less analyzed. Now, scientists will be able to build applications to mine this treasure trove of data on Google Earth Engine, providing several advantages:

Google Earth Engine can be used for a wide range of applications—from mapping water resources to ecosystem services to deforestation. It’s part of our broader effort at Google to build a more sustainable future. We’re particularly excited about an initial use of Google Earth Engine to support development of systems to monitor, report and verify (MRV) efforts to stop global deforestation.

Deforestation releases a significant amount of carbon into the atmosphere, accounting for 12-18% of annual greenhouse gas emissions. The world loses 32 million acres of tropical forests every year, an area the size of Greece. The United Nations has proposed a framework known as REDD (Reducing Emissions from Deforestation and Forest Degradation in Developing Countries) that would provide financial incentives to tropical nations to protect their forests. Reaching an agreement on early development of REDD is a key agenda item here in Cancun.

Today, we announced that we are donating 10 million CPU-hours a year over the next two years on the Google Earth Engine platform, to strengthen the capacity of developing world nations to track the state of their forests, in preparation for REDD. For the least developed nations, Google Earth Engine will provide critical access to terabytes of data, a growing set of analytical tools and our high-performance processing capabilities. We believe Google Earth Engine will bring transparency and more certainty to global efforts to stop deforestation.

Over the past two years, we’ve been working with several top scientists to fully develop this platform and integrate their desktop software to work online with the data available in Google Earth Engine. Those scientists—Greg Asner of the Carnegie Institution for Science, Carlos Souza of Imazon and Matt Hansen of the Geographic Information Science Center at South Dakota State University—are at the cutting edge of forest monitoring in support of climate science.

In collaboration with Matt Hansen and CONAFOR, Mexico’s National Forestry Commission, we’ve produced a forest cover and water map of Mexico. This is the finest-scale forest map produced of Mexico to date. The map required 15,000 hours of computation, but was completed in less than a day on Google Earth Engine, using 1,000 computers over more than 53,000 Landsat scenes (1984-2010). CONAFOR provided National Forest Inventory ground-sampled data to calibrate and validate the algorithm.