When getting directions on Google Maps, we suggest an origin or destination after you type the first few characters. But, we want to save you even more time by eliminating the need to type your current address each time. Today you can start using ‘My Location’ as a starting or ending point for your directions using the familiar ‘blue dot’ found in Google Maps for mobile. 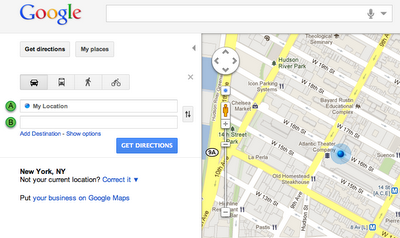 Directions with ‘My Location’ enabled
Now when you get directions on Google Maps, you’ll see “My Location” in the starting location field. All that is left for you is to fill in the destination and hit “Get Directions”.

The first time you use “My Location,” your browser will ask you to allow Google Maps to get your approximate physical location. If you accept, the dot next to “My Location” will turn from grey to blue, indicating Google Maps has retrieved your current location.

Depending on your browser, you can choose to have Google Maps ask you every time you use the “My Location” feature, or to remember your setting for Google Maps. You can also always opt-out by revoking the permission in your browser’s settings.

This feature is possible thanks to modern browsers supporting the GeoLocation API. If you are using one of the supporting browsers–Firefox V3.5+, Google Chrome, Opera 10.6+, Internet Explorer 9.0+, and Safari 5–Google Maps can use this technology to approximate your current location and use it as an origin or destination point.

With “My Location”, a second or two saved every time you get directions on Google Maps can add up!

I attempted to create an animated weather map in Bing Maps by using a custom tilelayer that pointed to a set of dynamically-generated animated GIF image tiles. Note that the tilesource itself never changed – it was the tile images which the tilelayer pointed to that were animated, rather than the tilesource itself. There are a number of limitations with this approach, since there is no way in the client application to control the animation – it just repeats in a fixed loop and, because each tile is loaded and animated independently, there is a risk for the animations frames to become out-of-sync.

In order to have control over the animation, we don’t want the frames to be hard-baked into an animated GIF, but rather we want to be able to refresh a tile layer programmatically, updating the underlying image source based on some client event or after a specified time interval. This is what I’ll look at it this post.

Updating the Tile Source of an Existing Tile Layer?

To change the properties of an existing tile layer, you use the setOptions() method of the tile layer, passing in the same TileLayerOptions structure as you do when constructing a new layer:

The problem is that, although the TileLayerOptions object defines a tilesource property that can be passed to the setOptions() method (and there is nothing in the documentation to suggest otherwise), it seems that you can’t change the tilesource of an existing tilelayer – any tilesource specified in the TileLayerOptions supplied to setOptions() is simply ignored. You can verify this quite easily using the following code (which also demonstrates the undocumented getVisible() method of the TileLayer class):

The results of the previous code listing will demonstrate that the opacity, visibility, and z-index properties of the tilelayer have all been updated to reflect the changed options passed to the setOptions() method, but the tilesource property is still the original, unchanged rand_tile1.jpg file.

So, if the tilesource can only be defined at the point the tile layer is first created, we can’t animate an existing tilelayer. Instead, we have to create a new tile layer every time we want to display a new frame in the animation.

A first approach at animating between frames might simply drop the existing tilelayer and then immediately create a new tilelayer in its place, advancing the source image to the next frame of the animation, something like this:

The problem here is that, because the current frame is removed before the next frame is generated, there will be a gap and/or probably some fairly horrible flickering between frames.

Approach #2 : Cycling through an array of tilelayers

You might be tempted to go to the other extreme and preload all of the frames into separate tilelayers before starting the animation. Suppose you had a 30 frame animation – you could create 30 different tile layers when the map first loads, with the tile source of each layer pointing to the tile images for each individual frames of the animation. Once all the layers had loaded, you could selectively show only one layer (visible: true) while hiding the others (by setting visible: false) to create a smooth animation between the frames. Something like this:

The problem with this second approach is that each new tile layer leads to many additional elements being placed in the DOM, many more image tiles being simultaneously downloaded, and having that many tile layers created at the same time would almost certainly choke the browser (as confirmed in a recent post on the MSDN forums, in which 10 simultaneous tile layers ceased a network).

Approach #3 : Buffering frames onto a queue of tile layers

The solution I went for was to try to create a “happy medium” somewhere in the middle of the previous two approaches – by creating a buffer of tile layers that queued up the next one or two frames of animation in advance, but didn’t preload all the frames.  Assuming the animation speed was kept relatively constant, I should be able to animate the frames that had been queued more smoothly than simply dropping and recreating a single layer, yet without requiring the resources to preload every frame in a separate layer.

To create my queue, rather than simply create an array of tilelayers, I decided to use aMicrosoft.Maps.EntityCollection structure. The first tilelayer in the entity collection would be set to visible: true and represent the frame of animation currently shown on the map. Subsequent visible:false tilelayers would be added for the immediate upcoming frames and pushed onto the end of the collection. When I wanted to display the next frame, I’d remove the first element from the collection and shuffle any other frames down the queue, setting the visible:true property on the new lowest frame. So my queue structure looked a bit like this:

Obviously, preloading subsequent frames onto the queue implies that the frames of animation will generally be being played in consistent, sequential order and I’m able to predict what the frame displayed in 2 or 3 frames time will be, in order to add it to the queue. If the user decided to jump to arbitrary points along the timeline, I wouldn’t have been able to queue the necessary frame in advance, and you’d get much the same behaviour from the queue as you would with a single tilelayer. Still, I decided that, for the most part, the queue would probably offer a benefit for the general use case of “playing” an animation.

I hoped that, by using the EntityCollection object rather than a generic array, I’d be able to make use of some of the Bing Maps events and methods to help with my animation handling, but more on that in a minute.

The javascript setInterval() method repeatedly calls a specified function at a chosen interval in time, specified in milliseconds. So to automatically animate through my queue of frames my first thought was to use setInterval(x) to schedule a function to execute every x milliseconds, which would remove the current tile layer from the queue (by tileQueue.removeAt(0); ), and immediately display the next element from the queue in its place. I’d also create and push a new tilelayer onto the end of the queue, to maintain a minimum number of ‘lookahead’ frames – ready-created tilelayers that were ready to display.

However, simply because the tilelayers pointing at the next frames of animation had been created and added onto the entitycollection, it doesn’t necessarily mean that the tile images for that frame had finished downloading. If you set a fast frame rate, it’s perfectly possible that the function called by setInterval would churn through the tilelayers in the queue faster than they were ready to display. Although you’d still get some benefit from the fact that the tiles had been requested slightly earlier than they were required to be displayed, it would be nice to only advance to the next frame if we knew it was fully ready to be displayed.

In order to find out if the next frame in the queue was ready, I thought I could make use of the tiledownloadcomplete event, as described at http://msdn.microsoft.com/en-us/library/gg427609.aspx. My idea was that, rather than simply wait for a predefined time to have elapsed before setInterval() would display the next frame, I would also monitor the tiledownloadcomplete event to know that the images for the next frame were completely ready. That would mean that animating between frames should be seamless, requiring nothing more than to swap the opacity of the current foreground tilelayer and its replacement. This sounded good on paper but, after considerable time spent wrangling this into a working solution, I encountered a number of practical problems with the implementation:

Reluctantly, I couldn’t find a way to make tiledownloadcomplete work for my purposes to reliably tell me that the next frame in my queue was ready, so I decided to go back to Plan A and make do with simply waiting a chosen amount of time before changing frames, in the hope that the time spent on the queue will have provided enough opportunity for the needed tile images to be fully downloaded.

There has been two stand out maps this week.

SRMLive is a great live real-time map of the Tour de France. If you are a fan of the peloton then you will love following the riders on this map.

Intersect, on the other hand, is an excellent application for plotting your life stories, with the added bonus that you can see how your stories intersect with the stories of others.

Intersect is an interesting new website that allows you to map stories by time and place and share them with the world. Once you have mapped your story you can then see how your narrative interacts with other stories – by seeing what else happened at the same time and place.

Intersect uses a time-line and Google Maps to show the intersections between your story and the stories of others. Using the map and the time-line you can find out what important events in other people’s lives were happening at the same time and place.

It has taken a while but I have finally found a live real-time map of this year’s Tour de France.

The map shows the real-time position of 13 of the riders. The map sidebar shows the current speed of each rider and their current heartbeat. Beneath the map is an interactive elevation chart of the current stage.