You may have already noticed, but the controls to enable and disable individual apps in Google Apps are now all in one place on the domain Control Panel under Organization & users > Services. 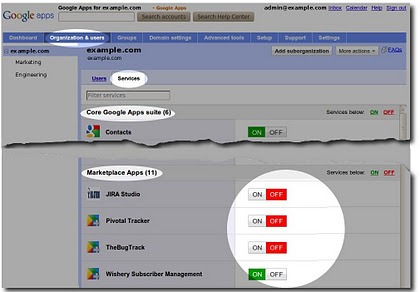 Domain administrators were already able to use this tab to enable and disable the Core Google Apps suite. Now they can do the same for apps they’ve acquired from the Google Apps Marketplace. This replaces the old link labeled “Disable {app name}” in the Dashboard > {app name} > “App status” page.

This on/off switch controls app and gadget visibility. Users in suborganizations where a Marketplace App is ON will see that app in the universal navigation bar under “More”, and will see the app’s contextual gadgets in Gmail. Users where the App is OFF will not see these links or gadgets.

Your customers still configure all apps through the Dashboard tab, but now the Control Panel Services tab unifies how they enable and disable every app.

The unified controls also share an important new scoping capability: now a domain administrator can select a suborganization and control which Marketplace Apps are visible to that organizational unit, just like the Core Google Apps suite!

In the example below, the administrator has overridden the domain settings for four Marketplace Apps to make three new tools visible to just the “Engineering” suborganization and to hide one application. 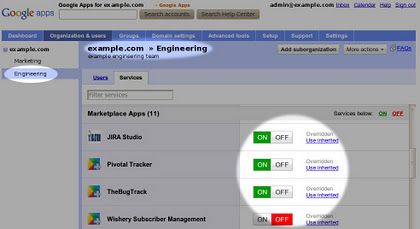 Visibility versus Authentication and Authorization

As developers, you should note that for any valid Google Apps domain user who goes directly to your website, OpenID/Single Sign On will always authenticate them if their domain has OpenID enabled. This includes users who are in suborganizations where your app is OFF. That means this visibility toggle feature is not a substitute for checking that the users accessing your app have a valid license.

Similarly, the on/off switch does not affect the OAuth scopes your app has been granted when the domain admin installed your app — the admin only revokes those by explicitly revoking data access or by deleting your app. The control panel on/off switch is just a way for a domain administrator to control the visibility of apps and gadgets that would otherwise be site-wide.

Last month Google  announced Google Apps Marketplace Staff Picks, an effort to highlight personal picks from the Marketplace team that have a combination of great functionality and ease of use due to their deep integrations with Google Apps.

Staff Picks are announced on the @GoogleAtWork Twitter account using #mpstaffpick, promoted on the Marketplace and summarized on the Enterprise Blog. We’ll also summarize the recent Staff Picks on this blog, with a stronger developer focus.

Manymoon began investing in Google Apps integration very early and was one of the early adopters ofthe Google Apps OpenID login feature. They were also one of the first to create a Gmail Contextual Gadget. We worked closely with Manymoon to get their application on the Google Apps Marketplace when we launched last March. Manymoon had immediate success, and quickly became one of most popular applications. Listen to what Manymoon co-founder Amit Kulkarni had to say in a recent interview;

The Google Developer Relations groups loves to work with developers, and help them build great business applications using Google technologies. The Google Apps Marketplace is there to help them sell their applications directly to Google business customers. There is also the Chrome Web Store for web browser applications, and Android Market for mobile apps.

See “How To Get Started” on Google Apps Marketplace for more information. See the Google Developer Relations site for links to technical people who can help you. Visit the Google Support Forums for immediate help and answers to your technical questions. Our job is to help developers build great applications, and provide a vibrant marketplace to sell those applications directly to Google customers. Get started today!