Boz Adventures included a database of roller coasters around the world.That site closed earlier this year, but Nathan is back with a new, larger site called Attraction Seeker. With roughly 6,500 geo-referenced attractions in its database, it can be quite a useful tool if you’re looking for something to do. 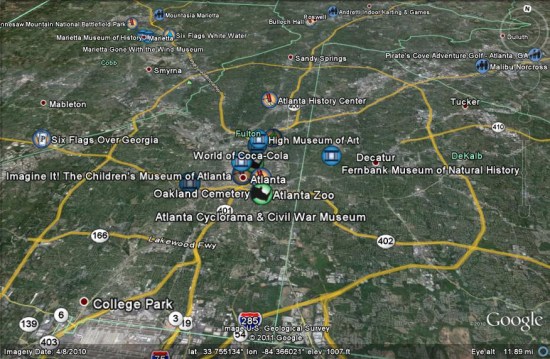 , which allows you to browse all of the content directly on their site.

It also has some nice features that allow you to sign-in and track places that you visit so you can keep up with where you’ve been and where you still want to go. It’s certainly a solid upgrade from the old Boz Adventures site, and should be very handy if you’re travelling to a new area and need to find something to do.

Paul van Dinther has done a lot of cool stuff with Google Earth, including putting out the excellent game “Ships” and “Drive the A-Team Van“, among others. He has also done a good bit of work in building and testing new ideas to stretch the Google Earth Plug-in to its limits. He recently built a tool to test the performance of the plug-in in various browsers, and now he’s back with a neat demo to show how to render text and animated bitmaps using the plug-in. 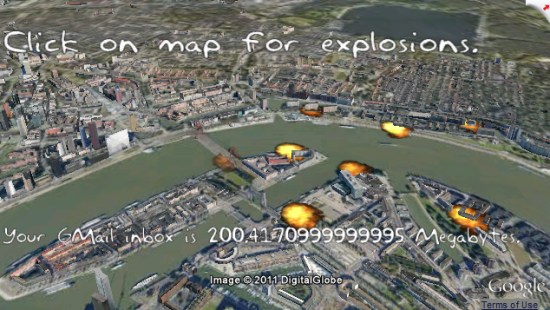 You can try it for yourself on his site. As he mentions on there, you’ll likely get better performance out of it if you use Mozilla Firefox or Internet Explorer with the demo, as Google Chrome has some speed issues when working with the Google Earth Plug-in.

It’s been nearly two years since Paul van Dinther released the excellent “Ships” game, and it’s recently been updated to be even better.

Check out what’s new in this video:

The new enhancements include:

The new “Ships” had a complete overhaul for the sound system. The new sounds are based on his new 3D sound library as demonstrated here.

The control panel now has a new Autopilot switch. Autopilot only engages when the ship is on a steady course (ie not turning) and the rudder is set in neutral. With the autopilot engaged it is possible to simply close the browser and come back to the page a day later to see where your ship ended up. Perfect for those long trans oceanic passages. This only works when Cookies are enabled on the browser.

You can now operate multiple ships simultaneously. More ships require more PC grunt. Running all the ships may push the limits of what your browser can take. 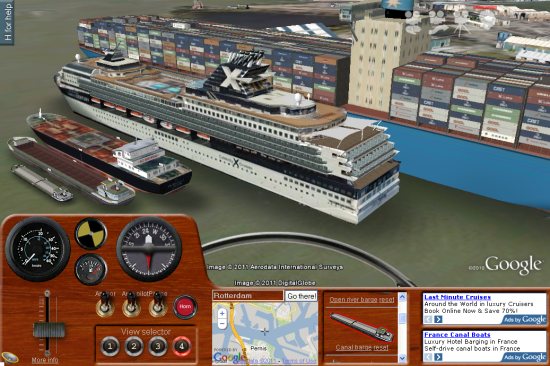 The control panel now has a Pause switch. Pause was already accesible by pressing the “P” key but a switch makes it more obvious.

The anchor was always a gimmick. It only made sound and nothing more. Now you can drop anchor at very low speed (Less than 1 m/s) which causes the speed to hit zero instantly. The anchor will drag when the power lever is at 20% or more. Continuous full power may even break the anchor chain. With the anchor down, the ships position will now be restored when you load the page again at a later date.

Various ships have been more accurately placed due to imagery changes in Google map data.

A more detailed cruise ship replaced the ugly model of the Queen Mary 2. The new cruise ship is courtesy of cleancruising.com.au. Paul build this ship as part of a big library of cruise ship models of which a small selection shown in this video.

If you’ve never played it before you should certainly head over to his site and try it out.

As a special bonus, Paul included Tahina (Frank’s sailing catamaran) as one of the “ships” to use. Very fun!

Also, be sure to read our post about ways to work around performance issues with the Google Earth Plug-in, as the game requires some hard work from the plug-in due to everything going on with it.