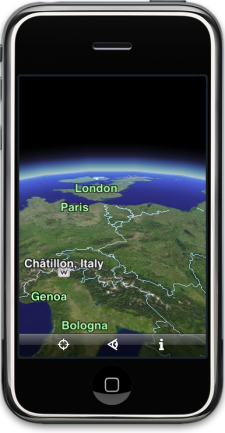 The announcement of Google Earth Builder at Where 2.0 last week was certainly great news for companies that can take advantage of the enterprise capabilities of it, but it may have some great side effects for the rest of us as well. As we mentioned briefly in our announcement post, there are some things coming for which we don’t yet have an explanation.

In particular, I’ve heard from numerous sources that data from Builder can be accessed from “all computers, tablets and smartphones”. What does that mean exactly?

During the presentations I attended at Where 2.0, Google repeatedly compared the security model of Google Earth Builder to that of Google Docs. In particular, you can choose to keep data private, make it fully public, or grant access to specific users via their Google Account credentials.

For Google Earth on your computer, it almost certainly needs an update. Despite how connected Google is, there is no log-in of any kind for standard Google Earth users, and therefore no way to grant users access to specific layers based on their Google Account info. Therefore, it seems like almost a sure bet that they’ll be adding a “log-in” feature to Google Earth in the next few months. I have three hopes for that:

1 — That it’s optional. While a lot of good could be done from it, part of the beauty of Google Earth is that you simply open it and it runs. Requiring a log-in from every users would certainly hinder that. UPDATE from Frank: Not only that, but a no-login option MUST be there for off-line Google Earth use. An important feature!
2 — That it ties to Google Latitude. It’d be nice to see (and interact with) your friends on Google Latitude from within Google Earth. While it’s probably possible now with some creative use of the Latitude API.
3 — That “My Places” will sync to the cloud. As I use different machines during the day (desktop, laptop, netbook, tablet), all of my data stays in sync automatically because of some great software like Dropbox, Evernote, Gmail, etc, but there is no way to have your Google Earth Places automatically sync between machines. That would be a great feature to have.

For tablets and phones it’s a similar situation. While the program could likely determine who you are based on other credentials on your phone (especially on Android), it’s doesn’t appear to have that kind of connectivity yet. With that in mind, I expect we’ll see updates to all of their mobile products in the coming months. In particular, I think that Google Earth on the Xoom is excellent, but there’s so much more it could do.

The update may only consist of user management to support the new Google Earth Builder data, but hopefully they also add some of the features that Frank mentioned a few months ago.

We don’t know the number of additional claimed Places listings but we do know that it lead to a dramatic uptick in their ratings and reviews, moving them to near parity with Yelp in the important restaurant industry within several months.

It makes sense that they would leverage this visibility to introduce their new 50% Offers beta. Over the weekend we started to see general purpose Offers videos, help files and end user and business sign up forms. Now they have added end user and business sign ups to Google.com/portland, the main landing page for their  Places marketing in Portland. 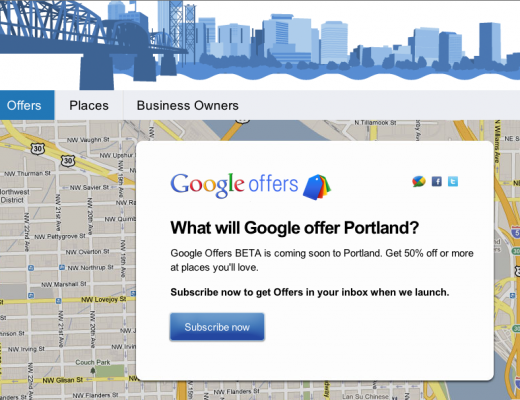 Last month, we rolled out Google Latitude check-in offers for 60 places around Austin. Today, we’re happy to announce that we’ve teamed up with some great partners to let you unlock check-in offers at thousands of places across the U.S. using Latitude for Android and iPhone. You can learn more at google.com/latitude/checkin.

Checking in lets you share the places that you visit and add context to your Latitude location for friends and family. At the same time, you can keep a history of where you’ve been while gaining status at the places you visit the most. When you gain status at places, they can now reward your loyalty with check-in offers. From discounts to a free snack, check-in offers let places give you an extra reason to keep coming back. Here’s how to get started: 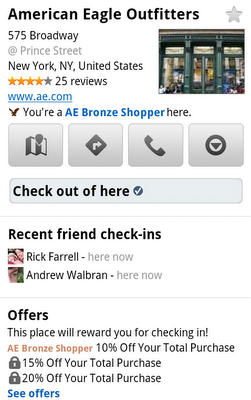 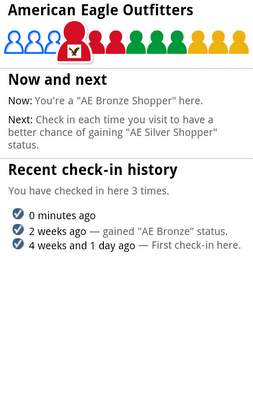 You’ll be able to see both available and locked offers at places. To redeem an available check-in offer, just select it from the Place page, tap Redeem, and show the full offer on your phone. 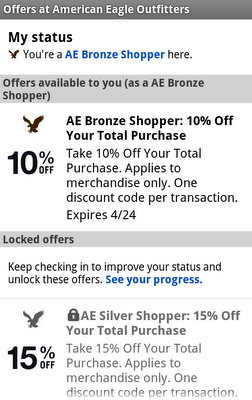 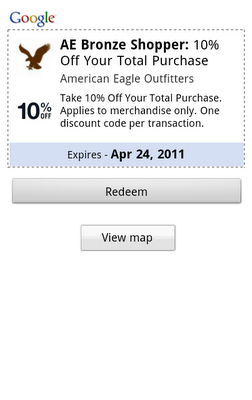 See available and locked offers (left); tap available ones to redeem them (right).

By default, you can become a Regular, VIP, or Guru at places, but we’re also letting partners create their own status levels for you to achieve (coming soon on iPhone). For example, you can become a Champion of Taste at Quiznos or an AE Gold Shopper at American Eagle Outfitters, unlocking their check-in offers at the same time. Take a peek at some of our partners and their check-in offers below or see all of them at google.com/latitude/checkin.

To start unlocking offers with Latitude, update to the latest version of Google Maps for Android (Latitude is a feature of Maps; requires Android 1.6+) or the Latitude app for iPhone. So start checking in at places when you’re there, and you might just unlock some great offers along the way.