When you’re modeling a small room, it can be a pain to see what’s inside. The problem is that the walls and ceiling get in the way. One solution is to lop off the ceiling and work in a top view, dollhouse-style. Other folks set up scenes from the interior corners and adjust their Field of View to something super-wide like 90 degrees. 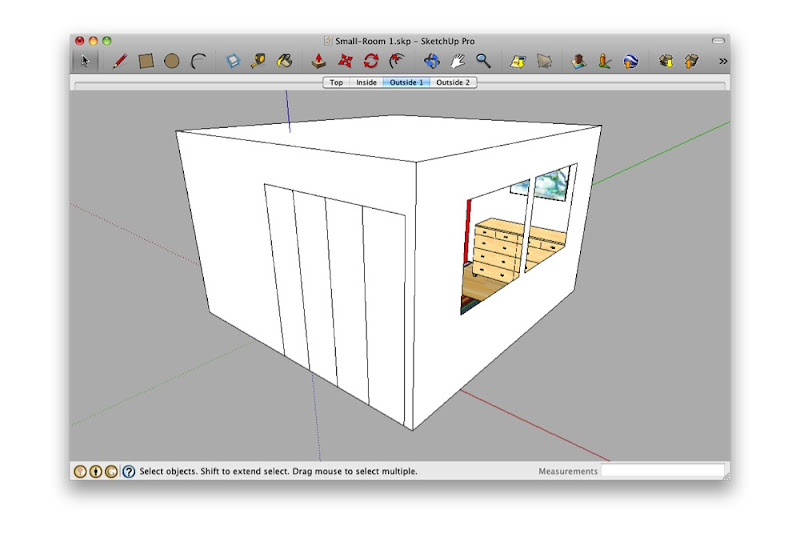 Looking at a small interior space from the outside isn’t very rewarding. 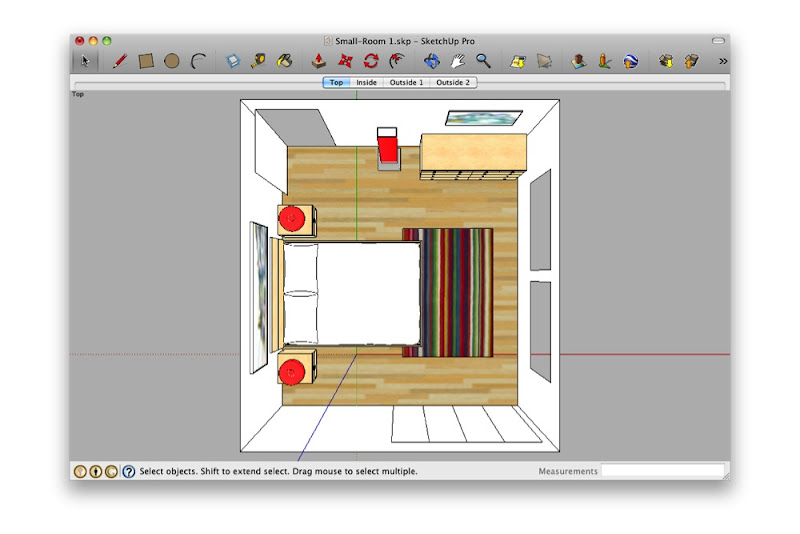 Deleting the ceiling and switching to a top view is useful, but fiddly. 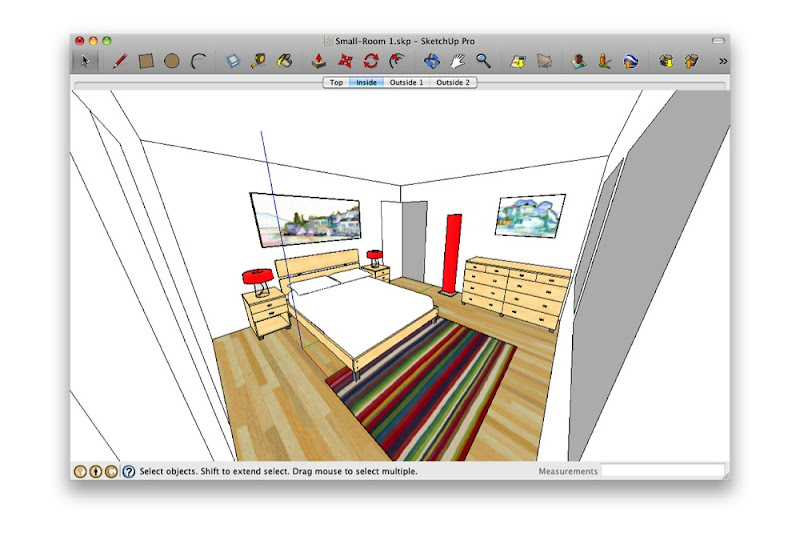 Standing in the corner and making your Field of View really wide is just weird. What are you—a housefly?

Both of the above techniques work—to a point. Personally, I think it’s like trying to read a book through a keyhole. By far my favorite method for working on small interiors is to make use of SketchUp’s ability to have faces with different materials on each side: The face separating Susan and Sang is yellow on one side and green on the other. 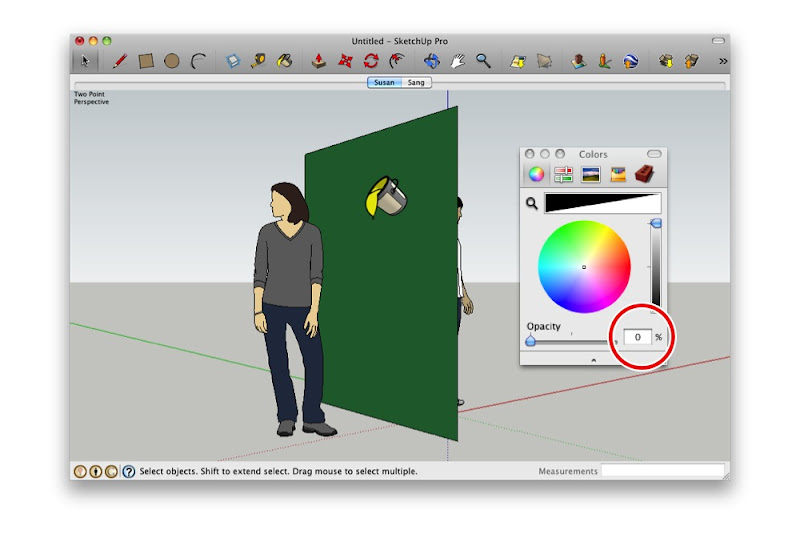 Creating a completely transparent material and painting the green side makes it see-through. 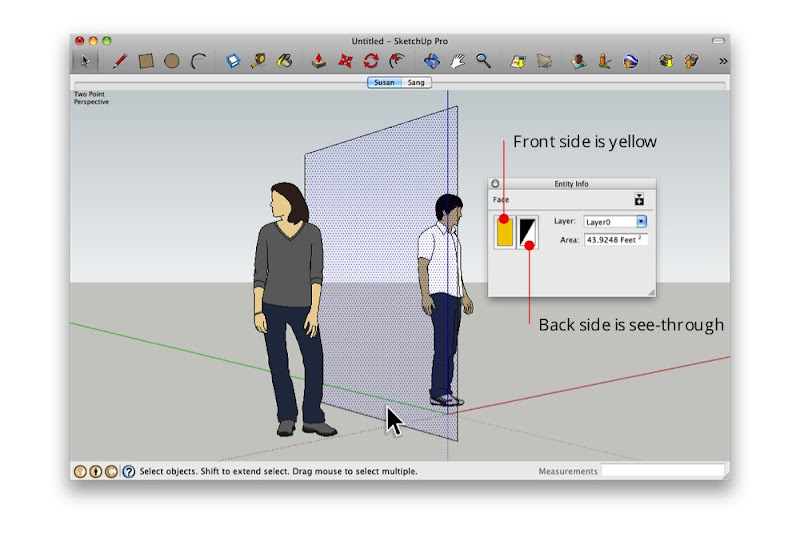 The Entity Info dialog box shows that the selected face is yellow on the front and see-through on the back.

By painting the outward-facing surfaces with a see-through material—one whose opacity is set to 0%—I can see in from the outside. Super useful, super simple. 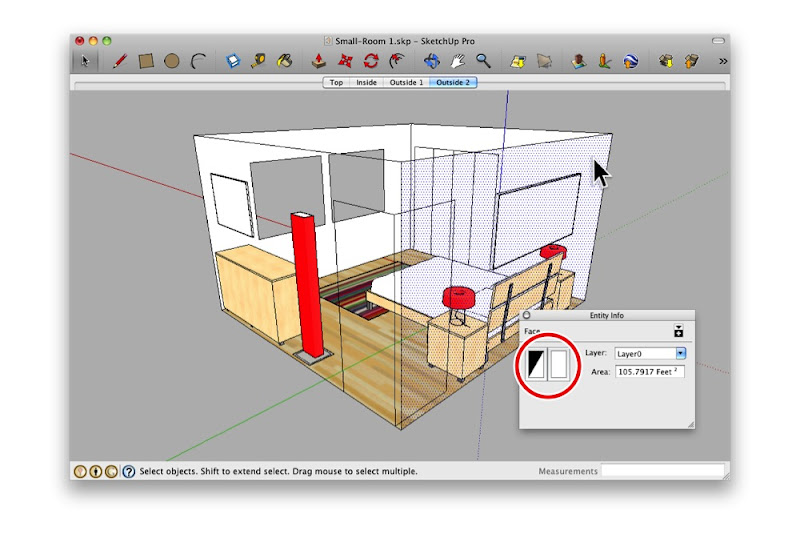 Here, I painted all of the outward-facing surfaces with a transparent material. Notice that the interior surfaces still look opaque? 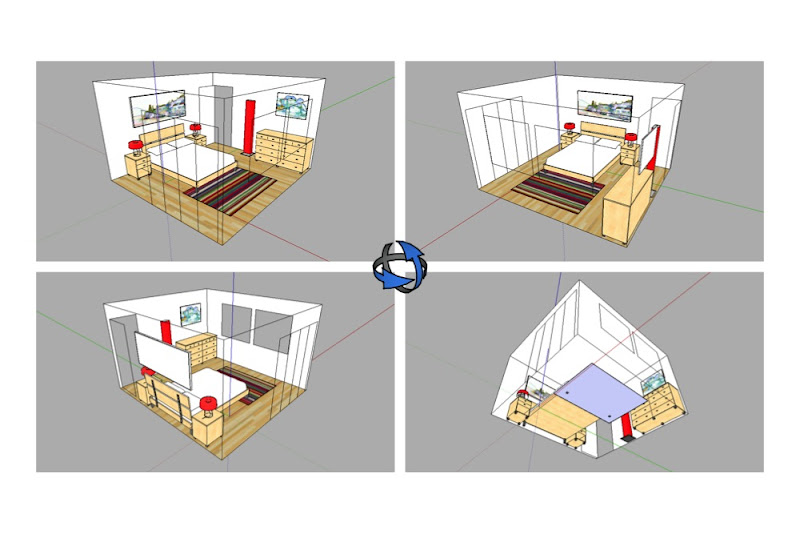 Fall means lots of things in the United States: leaves changing colors, apple picking, back to school and…football. This weekend, the National Football League (NFL) starts its season with a bang, with 15 games on Sunday and Monday. College and high school football are already underway and fans all across the country are tuning in, getting excited and rooting for their teams—in person, on television and online. As a Notre Dame alum (class of ‘87), the ups (and the recent downs) of Fighting Irish football are always a big part of my fall weekends. Regardless of your alma mater or hometown team, one thing is certain: American football is a big deal across the United States. Ahead of most of this week’s kickoffs, we thought it would be fun to take a peek at some of the football search trends from around the country.

There’s some debate as to what is more popular: professional (NFL) football or college football. Search queries make it clear that in spite of the [nfl lockout], the pro game and [nfl] is consistently more popular for U.S. searchers than all of [college football].

That doesn’t mean that the college game isn’t extraordinarily popular. Right now, we’re seeing the highest level of search queries for [college football] since 2004. In certain regions, college football appears to be king over even the NFL. The states with the most searches for [college football] are mostly in the southern part of the country, with the notable exception of the rabid fans of the Nebraska Cornhuskers. That’s no wonder—on Saturdays, when the Huskers are playing at home, their Memorial Stadium becomes the third largest “city” in the state.

We can also conduct a little popularity contest among players in college football. The Heisman Trophy, awarded annually to the top college player, is usually correlated to spikes in search query volume. This year, the early favorites for the Heisman are beginning to take shape. Stanford’s quarterback [andrew luck], who opted to play his senior year in college instead of heading to the pros, is out front in terms of searches, but fans should also watch out for Robert Griffin III from the Baylor Bears program. [rg3], as he’s known, had the game of his career in week one and might be the national breakout star of the first few weeks of the season.

Over on the NFL side, it appears that winning the big game has little relation to how often people search for their favorite player. In the past month, the most searched for player in the NFL is [peyton manning] of the Indianapolis Colts, who last won the Super Bowl in 2007. He’s currently sidelined with a neck injury, so his status is likely driving much of the current search queries. Meanwhile, the quarterbacks from the past two Super Bowl winners, [drew brees] from the New Orleans Saints and [aaron rodgers] of the Green Bay Packers, come in behind a player who isn’t even his team’s starter: Denver Broncos QB and former Florida Gators star [tim tebow].

The old saying goes, “on any given Sunday,” meaning that every team has a chance to win each time they hit the field. The adage manifests itself in typically balanced standings that last throughout the season and into the playoffs. But when it comes to search, we’re not quite so fair and balanced. In fact, there’s a clear favorite, and by this measure they really are “America’s Team”: the [dallas cowboys]. In the U.S., the Cowboys lead all other teams in search query volume, followed by the [chicago bears] and the [green bay packers].

No examination of football search trends would be complete without mentioning Fantasy Football. Millions of fans participate in their own drafts and watch their league’s waiver wires as they serve as coach and general manager for their own fantasy team. The enthusiasm is so fevered that, in the U.S. right now, more people are interested in [fantasy football] than President [obama].

Finally, for spectators, football isn’t just about teams and players. It’s also about the game day food. [Tailgating] searches peak every fall as folks turn to the web to discover new recipes and ideas for pre-game parking lot cookouts. The Super Bowl in February really drives gameday recipe searches, but tailgating staples like [guacamole], [wings] and [brats] all rank high in terms of search quantity every fall, with the king of all tailgating recipe-related searches being [dip].

Whether you’re an NFL fan, an NCAA nut or just someone who likes hot wings, here’s to a great season.

You could call our friends at Igloo Studios “multi-taskers”. While they mainly concentrate on creating products and plugins for designers and architects, they also have a podcast, a SketchUp training program and a popular book.

This project is cool for lots of reasons. For starters, USGBC’s 75,000-square-foot facility is loaded with efficient and innovative green features that have earned the building a LEED Platinum rating. Professionals regularly tour the USGBC for real-world examples of successful green practices.

However, not everyone has the luxury of being able to visit Washington DC, so Igloo Studios built this one-of-a-kind Google Earth tour of the building. Using a custom instance of the Google Earth plugin and building product catalogs from the 3D Warehouse, Igloo was able to create a tour of both the exterior and interior of the building!

As you navigate through the 3D building, you’ll notice it’s jam-packed with other goodies like a guided audio tour, photos and embedded videos. You can even click on the building’s materials and products to learn more about the green tech used in its construction.Once you finish the tour, you can launch a test that will earn you the same continuing education credits that you would get for taking the live tour.

And the coolest feature of all: if you find a building product during the tour that might be useful in one of your projects, you can download it directly into your SketchUp design!

Learn about building materials and then bring them into your model

If you’re interested in learning more about how your products or buildings can be visualized in this way.