In the past few years, Google has been working harder than ever to provide high-quality imagery to help in various relief efforts, such as the earthquake in Haiti, the Yazoo City tornado and the Qinghai earthquake.

They’re at it again with some amazingly fresh imagery from Sudan, to help the various humanitarian organizations on the ground over there. The new imagery went up just a few days ago, and the imagery from Sudan was less than two weeks old at that point! If you understand how Google Earth imagery works, you’ll agree that it’s a remarkably fast turnaround. 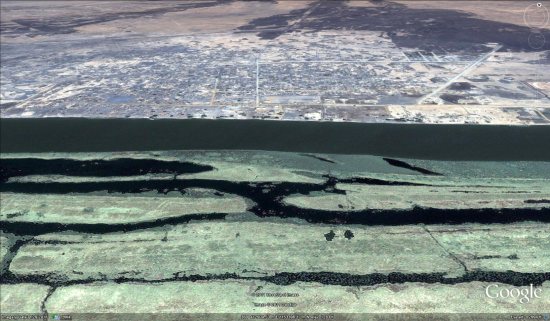 Over the years, we’ve had users ask why this kind of imagery is useful to those working on the ground. Google has provided a list of potential uses for this imagery, which they stated in a recent blog entry:

In Melut, there is a humanitarian hub where many services are delivered to at risk populations, including food, water, health care, education, and more. Given the varying needs of each of these services, maps can provide a variety of planning benefits for expansion, staff safety, and emergency procedures.

Google is asking for your help to build other tools to assist those in Sudan, such as using Map Maker to help map out the various roads and natural features in the area. A full list of tools available can be found here.

If you’d like to fly to Sudan in Google Earth to see the new imagery for yourself, you can use this KML file

to fly to Melut.

In his novel ‘Book of Dave‘, Will Self imagines a world in the future where sea levels have risen over a 100m. 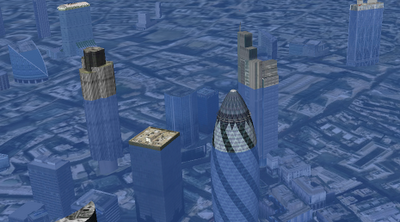 This destroys civilization as we know it but leaves London skyscrapers still standing half underwater in the sea – the remaining humans who live on ‘Ham’ (an island created from the rising sea surrounding the high ground of Hampstead Heath, London) climb one of these which they call ‘Central Stack’ to capture seagulls. As the book has a map of Ham in the front I played around in Google Earth to see how accurate the boundary of the island actually was, as it happens, Will’s imaginary island is what would really occur if sea level rose that far.

I realised the technique I used (one a teacher pointed out to me at a training session a while back) could be used in a lesson to visualize rising sea levels or ancient ice sheets. If you draw a polygon and give it an altitude that is about ground level the sheet created will disappear below the ground where the land is higher but be visible where the land is lower. Here’s how to create a series of these sheets in a folder so you can show a sequence of increasing sea levels :

3D Buildings: It’s a lot of fun to turn on the 3D buildings layer whilst you have sheets visible in the layers column, as in the screeen shot the layers will show how deep buildings would be sunk in the sea – not sure if any of those in the screen shot are Central Stack.
Absolute Heights: Experimenting with the levels, the sheet behaves oddly, it doesn’t meet the land at the height you would expect. I’m not sure why this is but it may do with the curvature of the earth (in the middle of a big square the earth will protude through a level sheet even though there is no topography). If anyone has a definitive answer I’d like to know.
Surface Flicker: If you zoom into the layers from a distance you may see line of where land meets sheet flicker and change. This is because GEarth creates the view of the earth you see by taking the satellite images and draping them over a set of ‘posts’ it builds rather like a marquee tent. If you view the ground from a higher altitude GEarth uses fewer posts so the surface changes as you zoom in and out. There is a way around this but its fiddly, I’ll post about it if anyone’s interested.

David Mihm has an excellent piece (that I happen to agree with) on why Groupon in a broad sense is synergistic for Google. I think coupons and the new twist that Groupon brings to them will be a successful  and profitable advertising medium. John Battelle thinks it worth significantly more than $2.5 billion. Greg Sterling though argues that it isn’t worth $5 billion and that very well could be true. But Google may be the only company for which the purchase makes sense at these levels.

I would like to add the following thoughts to the discussion. Greg has estimated  to me that only 25% of all SMBs will ever be willing to participate in self serve internet advertising. The leaves the vast majority of local businesses not participating in and unaffected by most of what Google offers (Tags, Boost, Adwords) today.

I have estimated that Boost with a 10% adoption rate and an average $100/mo spend would generate $500 million a year in income. If it approached the 25% cap it would reach $1.2 billion with current adoption levels of 2 million claimed businesses. I have estimated that Tags, at a fixed spend of $25/mo and the same 10% has a much more limited short term potential of  $60 million. Even as claimed listings grow, there is a very real top side expectation for both products in a self serve world.

Enter Groupon. It is a product that is already generating $500,000,000 in annual income. If Google did nothing else but add the revenue stream to Tags and Boost when it rolls out nationally, they would be at a $1 billion dollar in local ad revenue.

But Groupon also has staff on the ground trained in selling new media. The portfolio for these sales people would immediately increase with a buyout. And an impressive portfolio it would be. These folks could lead with a Groupon deal and then lock in a monthly recurring revenue source with Boost or Adwords. If their selling efforts for Groupon were a bust initially, they could still start folks with Tags and demonstrate the significant benefits of local internet advertising and of claiming their listing in Places and move on to Boost and Groupon down the road.

This purchase would not just give Google a successful, easy to explain coupon product for SMBs (and national players to add to the Adwords revenue stream) but it would give them an on the ground sales force with an actual foot in the door of the other 75% of businesses that would never self serve. It is conceivable to me that just by adding these products to the portfolio and pitching them in person Tags and Boost sales would skyrocket immediately.

Google would have in place Free (Places, Offers), Good (Tags, Tagged Offers), Better (Boost, *?) and Best (Adwords, Groupon) product offerings in both a self serve and full service model that could scale from the single shop to the national retail chain, nationally and internationally. It would cover 100% of the opportunity, have huge upside potential and start out of the gate with a roughly $1 billion highly profitable, income stream and a defensible position …

Investors may not like the economics and analyzed singly Groupon might not in fact make sense. But if Google could use the purchase to jumpstart and grow Boost, Tags and Adwords for local in the rest of the world, the potential of Groupon to them at least, is big.

*? one possible area of Groupon expansion for google would be downstream to an automated group coupon product that would work in those areas that Google doesn’t have a sales force. This would play to Google’s automation strengths and further leverage Groupon across broader markets.